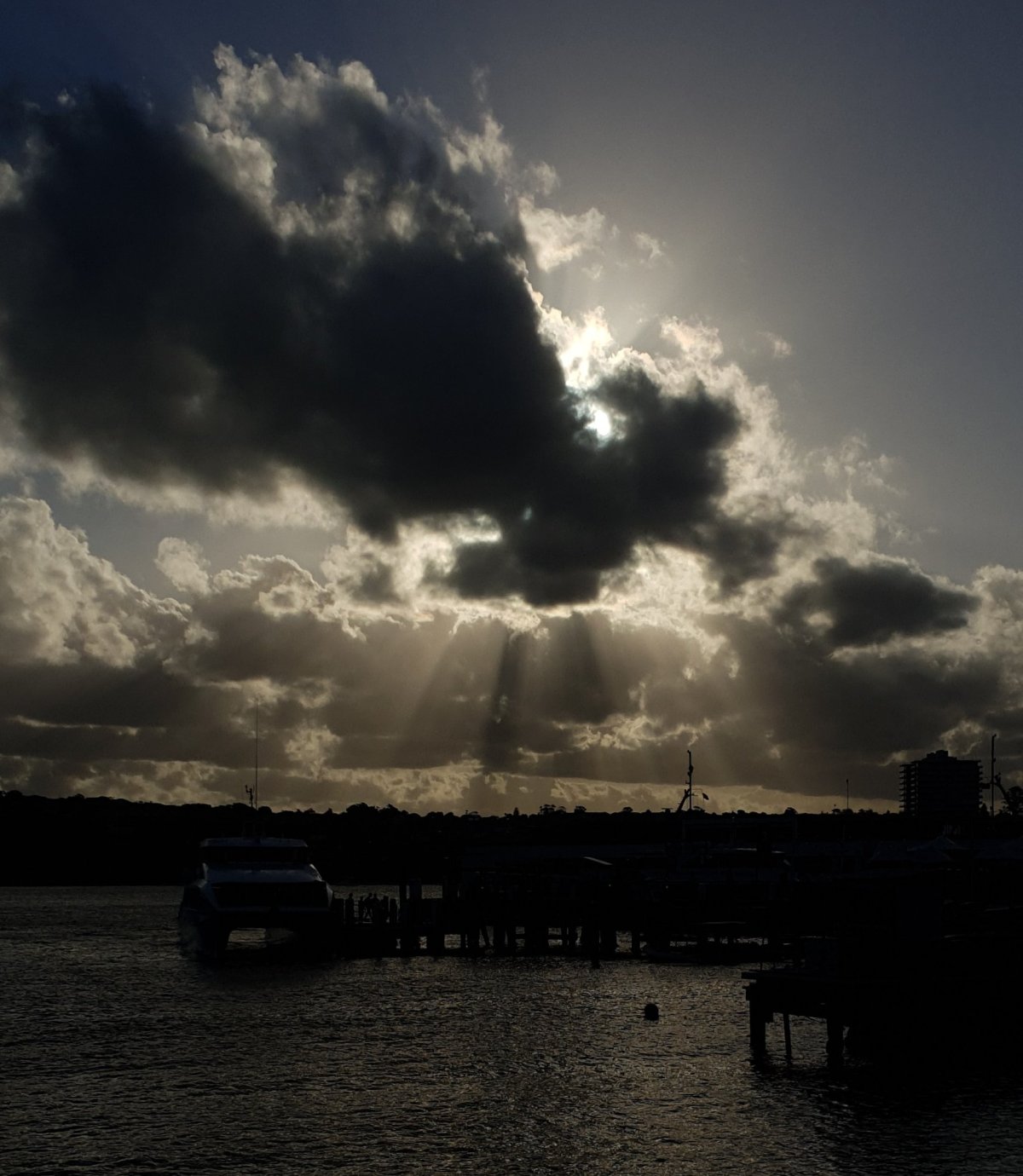 It rained overnight, dusty rain, the wind had brought dust in from the desert. There was a slight orange haze in the distance, but it didn’t cause us any problems.

L&J (Liesel and Jyoti) (I thought it was about time I used an abbreviation to avoid having to type both their names over and over, thus, saving time, effort and power, thereby reducing the carbon footprint of this blog, doing my bit) had pedicures and other beautifying treatments while I walked down to the library to write.

By the Manly Cove beach, there was a man feeding birds. He wanted to feed the cockatoos, but the pigeons outnumbered and out-bullied them. The man fought back with a stick. Waving it and throwing it at the pigeons. In the end, he threw his arms in the air. When they came down again he walked off.

Thank goodness the days of totally quiet libraries have gone, otherwise my keyboard would have been deemed the most offensive item. But there were children in one corner singing songs, and in another, someone was reading stories to a separate group of children.

Sitting next to me was a very smelly man. Not BO, but his coat had absorbed the smoke of a million cigarettes. He popped out a couple of times for a puff and during these intervals I tried to make head or tail of the notes he was reading. He’s a budding musician, and one day, all these (non-musical) notes will be turned into wonderful music. One day. I won’t hold my breath. And I won’t breach his copyright but his doodles, cartoons, random words, phone numbers, games of hangman and other miscellany might well become a beautiful symphony. Equally, I wouldn’t be surprised if it were to become a horrible, noisy cacophony.

I walked around Manly for a short time and sat down with a coffee and biscuit to listen to a real musician. This lady had a good voice, not very strong, perhaps, for busking, but I enjoyed her rendition of songs from many eras.

When I met up with L&J later back at the flat, I admired their new eyelashes and painted toenails, and I hope I didn’t miss anything.

I was up at 3am as is often the case (biological requirements) and I woke up again at 5.50. Perfect. I got up, got dressed, got myself out of the house and walked down to Manly Beach. I walked all the way along to Queenscliff hoping to see the glorious sunrise.

Well, there was 100% cloud cover at the time, but as the Sun rose, the clouds parted and small patches of blue appeared. I had fun with my camera, trying to capture the perfect shot of the Sun rising out of the Tasman Sea.

What was impressive though was the large number of mostly fit and mostly fit, young people up and out so early, each participating in their activity of choice. I did feel sorry for those who had to go to work later on. Boozers, losers and jucuzzi users, the human race was well represented here.

Some were on the beach playing volleyball, though not fully undressed as is the customary outfit. There were yoga classes, tai chi, some folks exercising with “towels and sticks”, weighlifters and the ubiquitous muscle man doing his thing while looking around to see who was watching. A few, more mature, men were power-walking, just look at me baby, swinging these arms, swinging these arms.

In the pool at the Queenscliff end of the beach, swimming lessons were taking place. One learner kept apologising for running out of breath. I feel your pain, brother.

The best job probably belongs to the tractor-driver, cleaning the beach.

There were other people taking photos of the sunrise too, some with phones (eg, me) but a couple had the whole kit, big camera, zoom lens, tripod. Amongst the more esoteric activities were pushing over a tree and sleeping in a children’s playground.

Back at the flat, some cockatoos were making a noise on the neighbour’s balcony.

It was still early in the day and the main activity after 9.00 was attempting to buy tickets for Elton John in concert, in Sydney, in a year’s time. His three-year Farewell Yellowbrick Road tour is very popular. We both sat there watching the wheels go round and round, but eventually, Helen was successful in her quest. I looked at the prices for shows in the UK. We’ll see…

Helen took the three of us to Koala Park where we had a great time making friends with the animals. The park suffered substantial damage recently in strong winds, but no animals nor humans were injured.

The koalas are very cute, very soft, very sleepy. I didn’t ask the guide whether it was true that all koalas suffer from chlamydia. I do know that we washed our hands quite frequently.

The kangaroos weren’t interested in the food we’d purchased especially for them. But the goats enjoyed it and one of the caged cockatoos was quite happy to receive some free feed too.

While it was interesting to see a wombat, he wasn’t very photogenic, lying on his back with his wedding tackle on full display.

I made friends with a kookaburra, his laugh was fantastic, we all laughed along. Guess what my new ringtone is?

Here I am feeding an emu.

I feel that I am now on good terms again with the emu race. When I first visited Australia in 1986, I was chased around by Gonzo the emu who thought I had food in my camera bag. (At least, I think that’s what he thought. In the photo, the overall shape of me with a camera bag on my back is very similar to that of a sexy female emu…)

There were some reptiles too, wallabies, a café and the whole place isn’t too big, we came away without feeling that we’d missed out on something.

In the evening, Adam joined us for a picnic down on the grass by the beach. It was very pleasant, bread, cheese, dips, chips and a wonderful sunset.