We drove into Manchester today and the car park we found was a bit of a challenge. The spaces were small, the corners were tight, the pillars were insulated by yellow concrete and the ramps from one floor to the next were nearly 45°. It stunk like a urinal, the only ticket machines were, of course, at the opposite end of the car park from where we parked. We worked it out. It was cheaper to park there for a couple of hours than to catch the bus. But next time, we’re definitely going by bus!

It was reportedly the warmest day of the year, so far, but I don’t think Manchester quite reached the 33.3° of the south-east.

We bought some American dollars and some Japanese yen. Guess where we’re going? It occurrred to me that it would be useful if every M&S had the same layout, then you’d know your way around. But then, you’d lose the sense of adventure. We also had lunch at Marks & Spencer. The restaurant there has a strange service system, not at all intuitive. You get an electronic device that we thought would flash when our beverages were ready. But no, it’s just to tell the waiters where to deliver the drinks. But not all drinks, only the cold ones. We had top collect our own hot coffee from the counter ourselves. Hot food would be delivered, but we carried our own cold snacks to our table. We got there in the end.

Manchester is full of bees at the moment. Not real, pollinating ones but a collection of sculptured bees each decorated by a different person or organisation. Bee in the City is only on until the end of September so get along while the weather’s good. 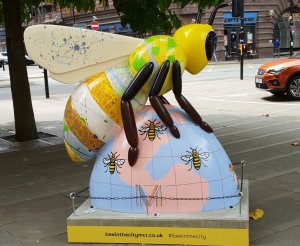 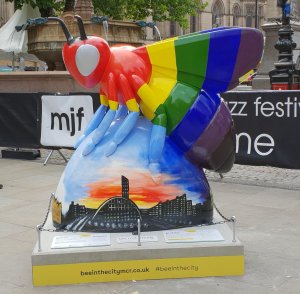 As we found with the elephants and Paddington Bears in London, it’s hard to get good photos without other people in the way. But they’re probably very appreciative of our presence in their pictures!

Yesterday’s solitary walk around Northenden was interesting. It’ll take a while to find every all the little, interesting things around here: 33 years in Chessington wasn’t long enough to see everything there, never mind the rest of London. But Northenden is the place to come if you want something done to your body: face, eyes, hair, teeth of course, but especially hands, feet, nails and tattoos, such emporia are in abundance.

I found a few charity shops, so we’ll be able to get rid of, I mean, to donate more stuff as we get more settled here.

I thought this place looked interesting, but when I knocked on the door, they hid behind the sofa and pretended not to be in.

The Tour de France has just one week to go. Today was the second rest day and Geraint Thomas is still in the lead. it’s fascinating to watch: who will win? Him or Chris Froome? Or will Tom Dumoulin surprise us all? Six more days racing to go.But as there was no TdF on TV, we caught up on a couple of series we’re watching. Will we get to the end of all the serials before we go travelling? Will we have to try and use the catch-up services from overseas?? What new programmes will we miss???