It’s sad, so sad, it’s a sad, sad situation. It makes me feel a little bit guilty, asking to be removed from the Rose Theatre mailing list after all this time. We’ll miss Kingston’s own little theatre. I was a Founding Friend too: there’s even a seat with a memorial plaque for Sarah, so have a look the next time you go. But we have to move on, change is difficult sometimes but it’s worthwhile in the end.

The Government website is a vortex of looping, self-linking pages telling you that you should do something but not how to do it. That’s another two hours I’ll never get back. But the good news is, when the time comes, I will receive the maximum possible state pension in the UK, just over £9000 pa. In Sweden, I’d get nearly three times as much. Here’s an old but interesting article. Yes, I wasted more time reading up on this and trying not to feel cheated.

But in eight days, we’ll be leaving this little nest of ours for a while. As we have to fly out of London Heathrow, we throught we’d spend a couple of days in the capital before we jet off. Sunday is the day of the Prudential 100-mile bike ride around London and Surrey. We’ll probably watch them roll in on The Mall, just as I did myself four years ago. And hope to do again one year.

Then early on the Monday, we’ll fly to Anchorage for Part One of our Gap Year Travels. This is why we’re trying to tie up all the loose administrative ends this week. We don’t want any important mail to end up in Chessington, after all. And we want the flat to be secure. Plus, the car will have a nice little holiday of its own somewhere. For a while, we thought about selling it but having lived here for a whole two and a bit weeks now, we accept that we really do need our own set of wheels. Public transport is OK, but we’re quite a way from the nearest train stations and tram stops.

The other day when we were driving somewhere, we passed a campervan with a brilliant sticker on the back. “Adventure before Dementia”, it said. And we thought, that’s great, that’s our philosophy right now!

This morning, I needed to go out to get some milk. I asked Liesel if she fancied going for a walk, and she said “Yes”. So we walked to Palatine Road, the main street, bought some milk and enjoyed our first coffee in the coffee bar, The Northern Den, recommended by our old Airbnb host, Iris, a few weeks ago. Liesel bumped into our old Airbnb host, Iris, just along the road. She’d left the café just before we arrived. What are the chances?

Instead of walking home, we walked further along the main road and after the bridge under the motorway, we started to walk along the path by the Mersey, towards West Didsbury. Liesel thought it would be great to have lunch at Greens, a fab vegetarian restaurant that we’ve been to several times with Jenny and Liam. It was a nice walk, yes, but poor old Liesel’s piriformis was playing up again.

We had a lovely lunch, the food’s always good. But it was so much quieter at lunchtime than it’s ever been in the evening. And as there aren’t enough pictures of food on this blog (said absolutely nobody, never ever), here’s one of what was left of my double chocolate sponge cake with chocolate sauce: 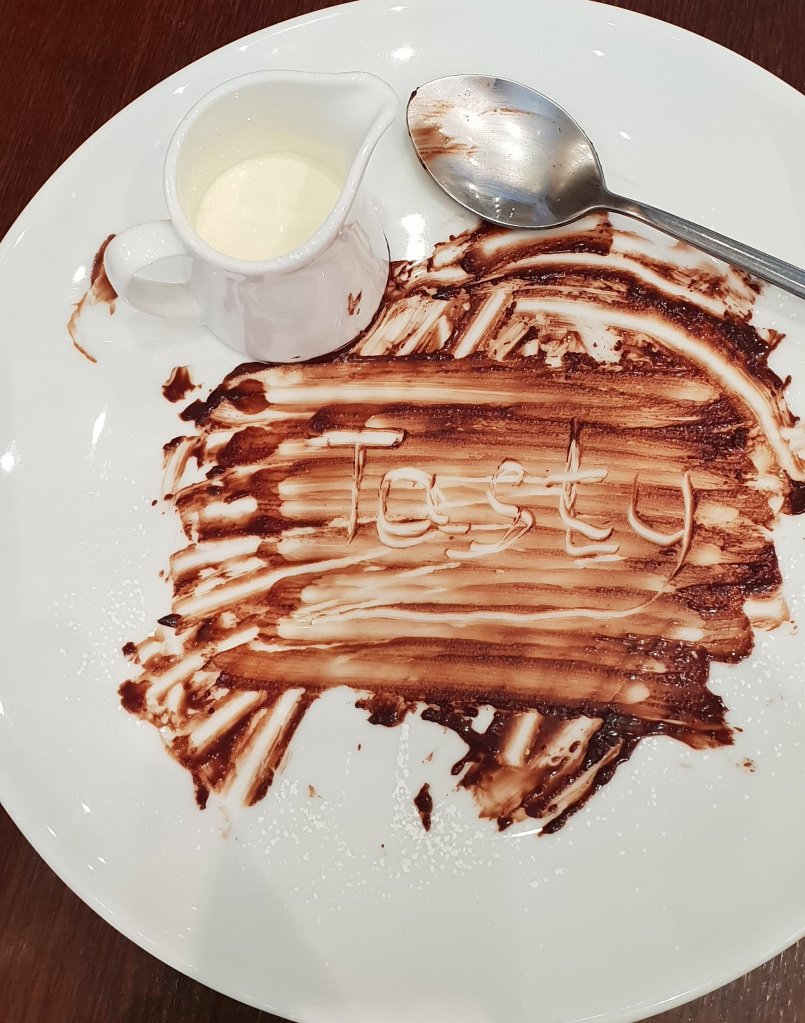 On this day last year, I was in an MRI scanner watching a silent Buster Keaton film while strange beeps, whoops and other sounds were being played. I was worried I might fall asleep, but I manged not to. This was some research being conducted on perception of sound by people and how it changes with age. I hope the right bits of my brain lit up while I was processing the information.

One thing we won’t miss from Chessington is our old neighbours’ frequent habit of cooking up fish curry outside. A big cauldron of pink goo that can be sniffed from hundreds of yards away. Such was the case on this day 9 years ago. It must have been especially strong that day because I mentioned it on Facebook. Pee-ook. I hope they enjoyed it, we didn’t!