The best part of today was looking after Martha for seven hours while her Mummy was ‘at work’.

This is going to read like a Granny’s boasting book, but Martha really is terrific. Very bright, interesting and interested, she has a fantastic vocabulary, she loves any opportunity to climb up stairs, often without holding on, and best of all, she eats like a trooper. If a trooper eats a whole bowl of cucumber, peppers, tomatoes, Babybels and a bag of Hula-hoops, followed by a pouch of strawberry and apple juice or whatever plus a bag of Paws, a fruit-based delicacy.

We took her to Salford where we went for a one-hour long boat trip on the Princess Katherine. We row, row, rowed the boat, gently down the stream and when we saw a crocodile, we didn’t forget to scream.

Martha began to count the many bridges we sailed under but they weren’t regular enough. She enjoyed seeing ducks, swans, geese, coots and a cormorant. She wasn’t so bothered about seeing Media City UK, BBC, ITV studios and the Coronation Street set.

The most disappointing aspect of seeing the river and the canal so close up was: they are really dirty, full of rubbish, fridges, scum and yet, fish are returning after a long absence.

We took Martha to the People’s History Museum. We thought she’d be fascinated by the history of people fighting for their rights and for better working and living conditions. Well, maybe in a few years’ time. Liesel and I found the subject matter and the exhibits interesting but Martha was more taken by the large bees on display. 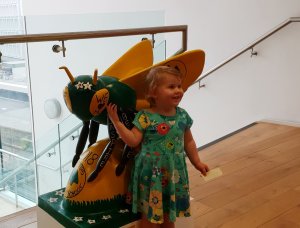 A bit of family history. In the 1950s, my two aunts and their husbands emigrated to Australia. They took advantage of a relatively cheap ticket to sail, and joined the small population of ten-pound poms. I guess this is one of the posters that attracted them:

Sixty years on and my younger daughter Helen has moved to Australia too, but it cost her much more than £10!

Martha was becoming tired so a babyccino and a cookie was called for. (Oh, alright, we had a coffee and a cookie too!) She fell asleep in the buggy on the way back to the car park but as we’re not as adept at the transfer as her parents, she woke up when we put her back in the car seat.

A lovely day with a lovely child and we’re wondering, just why are we going away for a year? Oh well, c’est la vie!

One thought on “Princess Katherine”