Liesel and Mick spent a lovely long weekend in the company of granddaughter Martha as she celebrated her second birthday. She, her Mummy, Daddy and baby brother William are also in the throes of moving house. No date for moving yet, but such is the uncertainty, we weren’t sure that Martha would be having her birthday at the proper time (but don’t tell her).

We grandparents took Martha to Chester Zoo one day which was good fun. No, we didn’t tick many animals off the mental list because most of them seemed to be taking shelter from the cold weather. It’s April, and it should be warming up a bit but the cold spell is going on a bit.

The Museum of Science and Industry in Manchester is probably too old for Martha, really, but there is an area where she can play with things: move magnets, turn whees, press buttons, interact with the exhibits. She can also hide in the lockers which may have been a highlight. 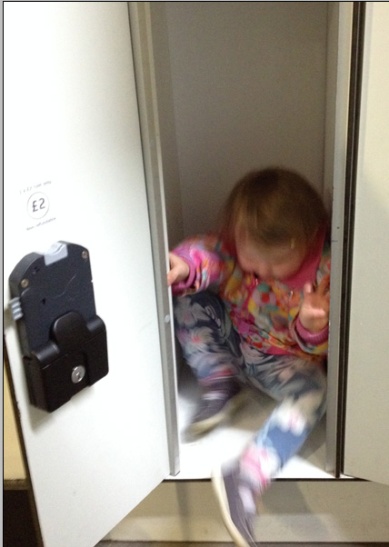 Back home, Martha was having fun chalking on her blackboard.

Howls of laughter, and a whip-round so Mick can go back to art school.