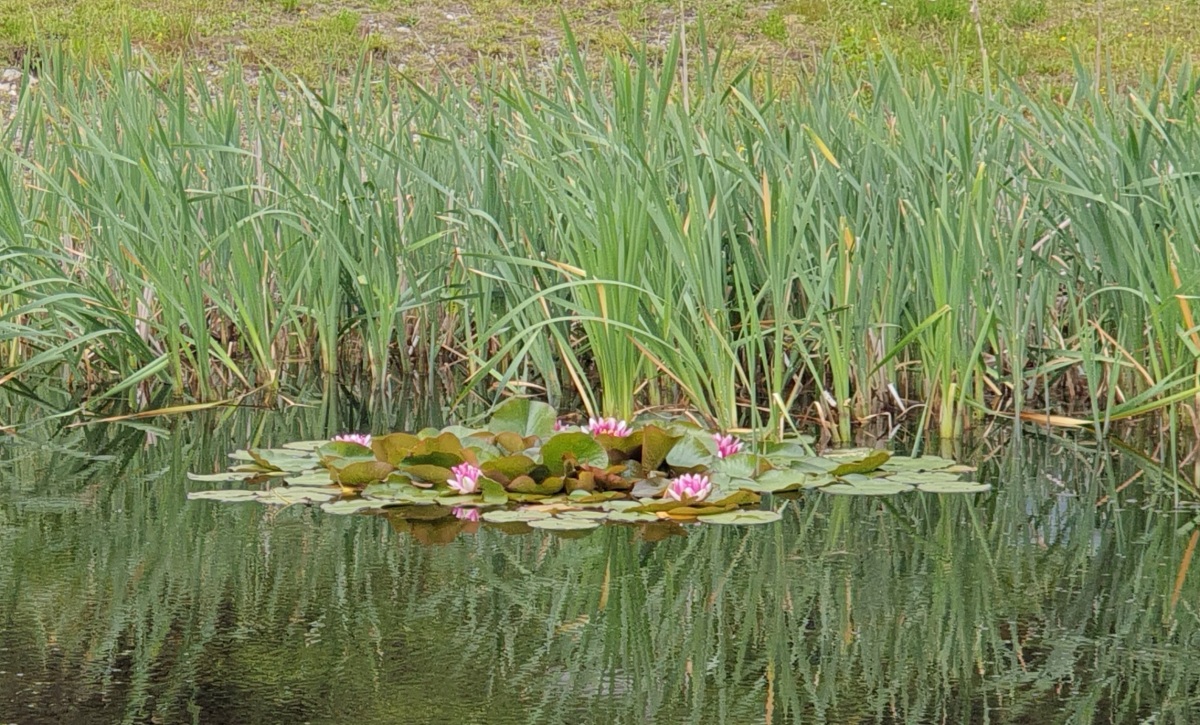 We failed again to consume everything supplied for breakfast, so we took the rest with us for lunch: fruit and a big raisin bun. It was time to say farewell to Susan, Kiva and the lighthouse. This would have been the ideal place to end our little break but we had a couple more nights to spend, at Fort William, before the long trudge home.

We awoke to the dawn chorus of sheep shouting at each other. By the rock over there, they were queueing up to scratch their butts. You could see the smiles of relief spread across their cute little faces.

We stopped one more time in Gairloch, briefly, noting that the beach car park was now fairly empty. We could have stopped there of course, but for the fact that we had booked a ferry so, unusually, we had a deadline to meet.

The mountains, lochs, scenery all continued to impress as we headed south.

The first proper stop on the way was by Beinn Eighe National Nature Reserve. This would be a fanstastic hike: and yes, it’s on the list for next time. This is the only waymarked mountain trail in Britain, so we probably wouldn’t get lost.

Not sure you’re allowed to camp in this car park, but Liesel suggested this might be a shower. We didn’t knock on the door to find out.

Well this was a surprise, tunnels on the A890, wide enough for one vehicle. What happens if you meet someone halfway through coming towards you? Well, it’s a very short tunnel, so one party or the other should have enough time to move into the passing place. I’m sure we’ve seen tunnels like this in the Alps during the Tour de France.

As we reached Kyle of Lochalsh, we caught sight of the bridge over to the Isle of Skye. An online friend of mine lives on Skye, but way over at the western side, too far to go today, and be back in time to catch our ferry. Next time, Sheila, OK?

Yes of course we didn’t spend anywhere near long enough on Skye. Add it to the list for next time. But what we saw was stunning. Very green, lots of trees, plus the hills, the Cuilins, in the distance. So much to explore.

After taking a detour off the main road, we encountered this very narrow track. We chickened out and returned the way we came. The map suggests this track would take us back to the main road, but, well, would you risk it?

Here we are looking cool and relaxed on the ferry back to the mainland. The breeze on board was warm and refreshing, we didn’t need to cower inside, out of the elements. Guess how many dolphins we saw during this 25-minute passage?

Glenfinnan Viaduct is now most famous for its starring role in the Harry Potter films. It is a wonderful feat of engineeering, the first time concrete had been used for such a major project. We tried to book a ride on a train between Fort William and Mallaig, which would take us over the viaduct, but it was fully booked for months ahead. Now we know, we’ll catch it next time.

The car park was full, the busiest place we’ve seen for a long time. Many of the visitors were east Asian, and we can only assume they’re students here in the UK. I heard at least two languages being spoken: Japanese and Chinese, but whether Mandarin or Cantonese, well, my ears weren’t fully tuned in.

Who mentioned Harry Potter? And do the actors get compensation for this use of their images? We stayed away from the herds and hordes of people as much as we could while walking towards the viaduct on a lovely gravelly path.

I walked up to the first Viaduct Viewpoint, where many people were sitting and standing around and I thought maybe they were waiting for a steam train to come a-puffing over the viaduct. But no, they were, as far as I could tell, talking about the engineering problems posed in constructing such a marvellous edifice, and counting the 21 arches. Certainly the view from above is very impressive.

Nearby, just over the road, is a monument to Bonnie Prince Charlie. The story is told in Latin, English and Gaelic. The Prince is on top of a column, so it’s quite hard to make out his features.

We reached Fort William and I was a little disappointed that we weren’t greeted by a big welcome sign. I wanted a good photo for grandson William who is beginning to recognise his written and printed name.

On the way into town, the only radio station we could tune into was Nevis FM, playing songs from the 50s, 60s and 70s. There was almost too much choice of places to eat. Deep Fried Pizza sounded good. On closer inspection and reading the sign properly, it was in fact Wood Fired Pizza. Unfortunately, they were fully booked for the night. Another place down the road also had a long queue outside. So we ended up right where we’d parked the car: Spice Tandoori and we had the best Indian meal we’ve had for a long time. And it was a strange feeling sitting inside a restaurant with other guests.

Our b&b was conveniently located but sadly what struck me as we went in was the stench of cigarette smoke. What struck Liesel at first was one of those gadgets that squirts a cloud of smelly chemicals into the room every few seconds, presumably to disguise the other smells. Oh well, a bit of an anticlimax after the lighthouse, but it’s only for a couple of days. How can we tell we’re in the shadow of Ben Nevis, the highest mountain in Britain?

Neither of us had a particularly good night’s sleep. The view out of our window is OK but it was raining a bit as well. After a late breakfast of cereal and croissants, we went for a walk to the Glen Nevis Visitor Centre. Or the Ben Nevis Visitor Centre, depending on which street sign you believe, or whether you trust Google Maps. It was less than a couple of miles from our b&b but nice to be out in the fresh air.

The idea of a certificate was quite appealing. So did we collect one? Well, the trouble is, if we’d gone in and lied about walking the length of the West Highland Way, they might have asked us for proof. They might even have asked us where the other end was. So we carried on along the road.

For a while, we walked along a track that was more or less parallel to the road, to our right, with the River Nevis to our left.

Curling is a popular sport in Scotland, but we just usually see it at the Winter Olympics. We found an old rink with some old stones. I was going to have a go at curling but I couldn’t even lift the blinkin’ stone.

No, it wasn’t really too heavy, it was cemented to the ground. Honest.

Amongst the interesting artefacts at the Visitor Centre was this old machine, which brought back many happy memories.

Actually the main memory it brought back was the day I was finally able to retire from the job. It was never as good once they got rid of the bikes.

The climb to the summit of Ben Nevis is a long walk up a sometimes narrow path. The views are stunning of course, and near the top there’s a section which is fairly flat before the final steep incline to the top. It’s much colder at the the top, so I was glad I took up an extra layer of clothing. No, this wasn’t today’s climb. This was my memory from about 1997. Today, we walked up as far as the first stile, but I suspect we might be back one day to conquer the mountain.

After the brief hike up a slight incline, and not being able to see the actual summit from where we were, we began the walk back to town. We found an alternative path, on the other side of the road this time, and enjoyed the warmth, the scenery and the flowers.

These water lilies with pink flowers wouldn’t be out of place in a Fijian or Japanese pond. And, something else out of place was a small green van selling refreshments such as an egg bun and coffee. We sat on a rock and had a break. An egg bun is what we normally call a bread roll with a fried egg. Or, a fried egg barm, in Northenden.

As we reached the more built-up area of Fort William, if you’d asked what sort of bird we would see, I don’t think either of us would have guessed this one.

And just like the best avian subjects of my photos, it flew off before I could get too close, straight back to its home on Loch Linnhe, presumably.

Yes, it’s great having a garden dedicated to the hard-working men and women of the NHS. But just like clapping for them on a Thursday night, I’m sure they’re rightly thinking they’d rather have a payrise of rather more than a measly 1%.

A quick visit to the railway station wasn’t very interesting in the end. I was hoping to see one of the steam engines that take people across the viaduct to Mallaig, if they book online early enough, of course, but all I saw was the Caledonian Sleeper.

We wandered slowly through the town centre, only venturing into one shop, but noting how many shops were closed, and not just because it was Sunday.

The Piper played his tunes, which, as we discovered a bit later, could be heard quite a long way away.

In 1911, Henry Alexander of Edinburgh drove his Model T Ford to the top of Ben Nevis. Liesel and I looked at each other. What a terrific idea. (There is more about this story at this Ben Nevis website, which has a lot of other fascinating information too.) We didn’t walk up today, but maybe we could take the Mazda 2 up? We abandoned the idea because neither of us wanted to reverse all the way down again, plus, I couldn’t remember whether there was enough room at the top in which to turn the car around.

We started walking back to our b&b, only 10 minutes away from the town centre, although it had seemed a bit further last night. We caught up on another couple of stages of the Tour de France and I think it’s fair to say, it’s been the most exciting first week we’ve seen for a few years.

This has been a terrific couple of weeks. Scotland’s beauty can only be described in words by the best of poets. But in the greater scheme of things, I think we’ve learned that we need to keep up a much more rigorous exercise regime. Despite our best intentions, during lockdown, we’ve become more comfortable, staying locked down, locked in at home. Also, we need to plan to do more things, not necessarily two weeks away, but some nights out, at music and comedy gigs. Having things to look forward to certainly is an aide to our mental well-being. Thank you Liesel and thank you Scotland.