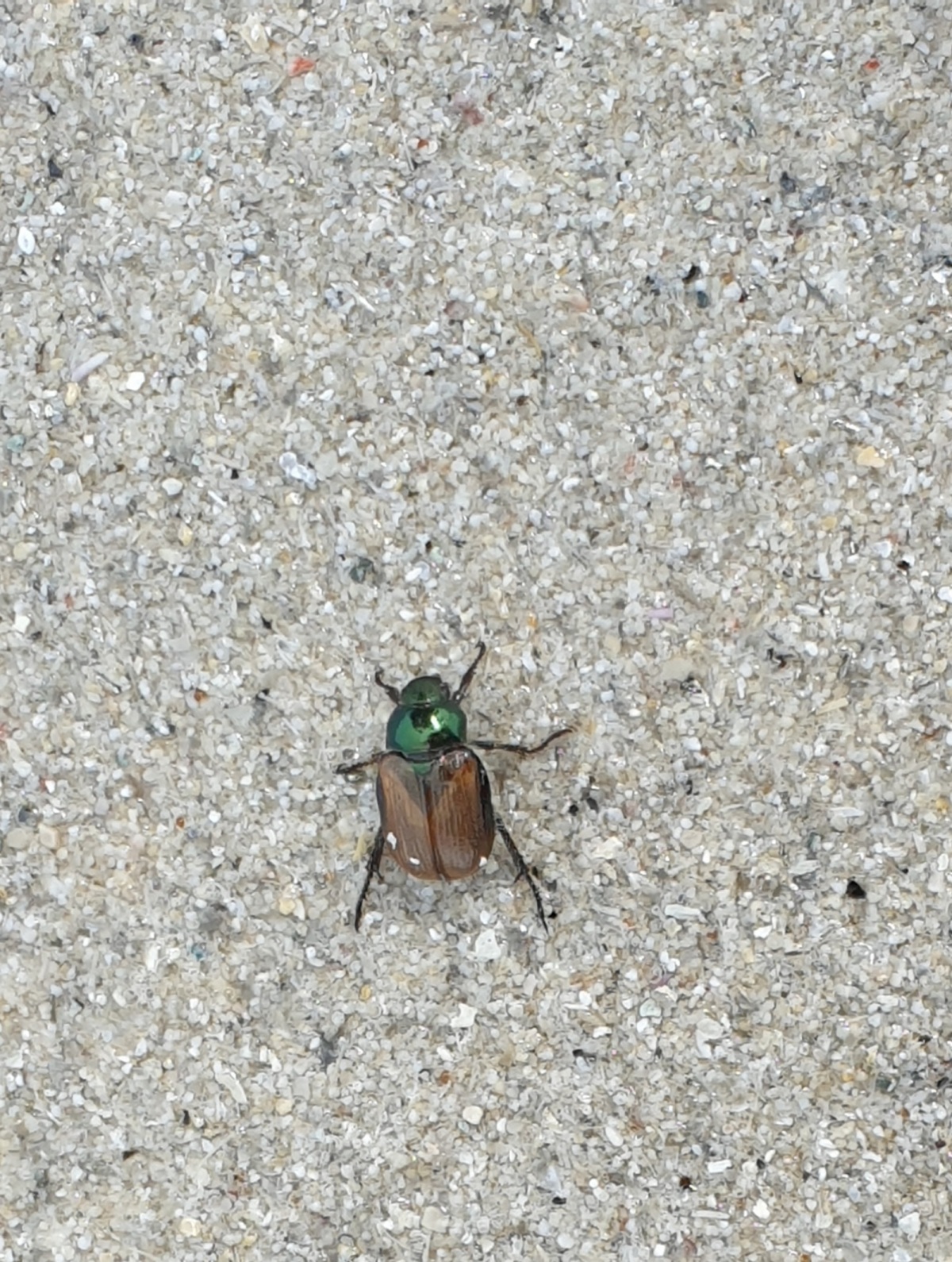 You can’t have a proper holiday without spending a day on the beach. And despite being in the far north of Scotland, that’s exactly what we did today.

I knew the day would be a good’un when Liesel brought me a cup of tea in bed. Followed by toast. The view from our bed is pretty good, so we just sat there and admired it for a couple of hours.

When we finally got up and set off for a walk, of course we went the wrong way. Well, it’s a 50-50 chance. Daisy soon put us right. She looks a bit full, but Liesel declined the offer of a drink of fresh milk.

We passed by a pretty loch: in fact, there are at least a couple nearby.

Past the craft village, past an old church and we found Balnakeil Beach. The wind had really calmed down since yesterday, and there were very few other people on the beach. Just the way we like it.

What a lovely expanse of sand to walk along. The sand dunes are a Sight of Special Scientific Interest so we’re asked not to walk on them. We thought this might be due to the presence of nesting birds, but other than a few ordinary gulls (no offence, ordinary gulls), we didn’t see anything of unusual ornithological interest today.

We had several attempts at taking a selfie with a decent background. This is the least worst.

Halfway along the beach, there’s a rocky outcrop. I investigated, with a view to maybe clambering over to the other half of the beach. This proved too difficult. I could have walked around it, but the tide was too high. So I walked back and around: the long, sensible route that Liesel had taken and I caught up with her having a sit down on a nice grass tussock.

There were lots of little beetles scurrying about on the sand. There are 400,000 species of beetle but I couldn’t quite put my finger on which one this is.

Actually, there was a flock of small birds out on the water, too far away to be able to identify, but some kind of marine duck. They were happy diving but then after a while, we realised they’d disappeared.

The texture of the sand varied. Soft and dry in some places, fairly solid sometimes, and occasionally soft and squidgy, we were leaving quite deep footprints. The sea was very calm today, and as it was unexpectedly warm, I wish I’d brought my swimwear. But until very recently, I never even thought about a sandy beach on the north coast of Scotland, never mind entering the cold Atlantic waters.

We sat down for a while and watched the people. by which I mean the two other people who arrived just as we sat down. They drew a picture in the sand so of course, when they’d wandered off to the other end of the beach, I had to enhance their artwork. After which, we beat a hasty retreat.

It’s the first day of the Tour de France so while on the beach, we watched it on my phone for a few minutes. What amazing technology, and really unexpected to have such a good 4G signal on the beach a couple of miles from the small town of Durness. You’re using up your 4G data allowance on watching TV, Mick? Yes, I know, strange huh? It’s a long story but I had to guess how much data I’d need for a couple of weeks here, knowing we’d be on Google Maps quite a lot. My previous allowance ran out on our first day here, so I just bought a reasonably big package. 80 GB since you ask. For a month. A week later and I only have 77.97 GB left. So squandering it by watching TV is not likely to cause problems later on!

We walked back along the beach, which was now becoming more busy. Nothing like Formby on a hot day, of course. We had a quick look at the old Balnakeil Church and its graveyard.

I am indebted to Captain Mackay John Scobie whose tomb I sat on while shaking the last of the sand from my shoes. He worked for the so-called Honourable East India Company and died nearby in Keoldale aged just 44 in 1818. Also here is the grave of Elizabeth Parkes, aunt of the famous Beatle John Lennon, according to the information panels.

And as if the day couldn’t get any better, our walk back home took us past the craft village and, oh dearie me, Cocoa Mountain. We enjoyed a coffee here plus some of their fine chocolate.

Neither of us wanted to spend a lot of time looking at all the arty crafty places in the village, but we did venture into Mudness, where Martina MacLeod has been producing ceramics since 1991. Liesel came away with a yarn bowl and a small puffin.

Back at our hut, we watched the rest of the day’s live coverage of the Tour de France on TV, not at all enjoying the two big crashes. Poor old Chris Froome always seems to be in the wrong place at the wrong time. But it’s great to see Mark Cavendish back at the Tour.

I completed another really difficult Arrow Sudoku puzzle. This one took 75 minutes, a record that I’m not proud of, but I am proud that I solved it at all, in the end. We watched the bunnies, we listened to Classic FM, thanks Moira Stuart and Andrew Collins. Liesel’s crocheting project continues, but I do miss the clicketty-clack of knitting needles!