Well, the good news this week is that Liesel wasn’t arrested after all. I would have visited her in jail of course, if the Covid restrictions allowed me to. The unsolicited phone call from ‘HMRC’ was a computer-generated voice, threatening arrest if she didn’t press button 1 straightaway to resolve some fictitious tax issue.

Is that the most exciting event of the week? Not quite. We went for a drive in the car for the first time since before Christmas. We still remember how to drive, always a bonus, but one of the tyres was flat. We got that fixed before setting off. Where did we go? We visited the Dark Lands beyond our own postcode.

After a snowy start last Saturday, it was my turn to cook our evening meal. I love a good non sequitur, don’t you? I have two selections in my repertoire and this time it was toad-in-the-hole. The rest of the week we enjoyed Liesel’s culinary delights, thank you, Liesel, much more skilful and with a much more varied menu!

We went for a walk and came across a fire engine near Northenden’s Riverside Park.

The river was flowing fast but it was much lower than at the height of the floods last week. Lots of detritus had flowed downstream of course, plenty of trees and branches and so on deposited by the high water. But the ugliest sight probably is all the plastic caught in the trees on the island and tangled in the vegetation on the river banks.

There is a large group of litter pickers in the area, Wythenshawe Waste Warriors, and one day, when we’re no longer shielding, we’ll join them. So far this year, they have collected nearly 900 bags of litter in Wythenshawe, Northenden and the general area. One day, someone will wade over to the island and collect all the rubbish from the trees there.

It was a good decision to wear my new wellington boots when I walked through Wythenshawe Park. The path was still flooded: in fact, half of its puddle was frozen too. The grass either side of the path was waterlogged to the point that one side resembled an ice rink. I was joined on this particular walk by Tina in Coventry. From a very safe distance, I hasten to add. Whatsapp was the means of communication.

Mick: I’m out for a walk! Just tried to break the ice in a puddle. Useless!
Tina: OMG 😮 Glad I went food shopping so I don’t need to go out!!
Mick: Yes I’m sure!

Mick: I found the ice rink! A big frozen puddle on the grass
Tina: Oh wow 🤩
Tina: Poor birds
Mick: It’s very quiet. Spooky- apart from the rumble of the motorway over there…
Tina: Looks dangerous
Mick: It is. Very thin
Tina: Well, stay on the paths

Tina: Gosh be careful
Mick: Made it 🙌 to the other side. Dry!
Tina: Well done but be cautious
Mick: My mate Oliver

Tina: Oh really that’s great 😀 will warm you up? Is Liesel with you on your walk? Which coffee shop is that? Bit of a queue
Mick: Liesel came out with me but I wanted to go further.
Tina: Oh trust you
Mick: Not sure what it’s called. It’s in the park!
Tina: That’s great it’s open during these times
Mick: The dog bowls are frozen!

Tina: Awwww
Tina: Oh dear there doesn’t seem to be much snow there anymore
Mick: It’s The Courtyard
Tina: Oh you got your coffee?
Mick: Patchy, still on the roof 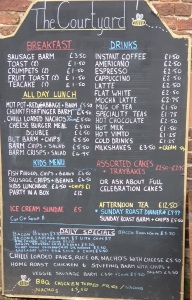 Tina: Hot Vimto lol yes lots to choose from! They do food as well or just drinks? It’s not bad prices. What’s a barm? A batch or bread roll?
Mick: I have my coffee and chocolate orange brownie! Yes a barm is a plain bap, burger bun type thing. Usually. I have been given a sandwich before made with sliced white bread!
Tina: Ooh the brownie sounds lovely 😊 it’ll give you an energy boost 😂 Oh I see… I’ve never heard it being called a barm before
Mick: Yes, I’m still learning the language. I’m walking the long way home, trying to avoid all the people
Tina: That’s understandable, you’re having a good walk Mick, lots to see
Mick: Lots of snow on the grass. And more ice

Tina: Your coffee got me making a coffee too. It’s freezing can’t believe it’s snowed but it’s going to rain next week so hopefully it’ll clear up. Hope it doesn’t get icy and slippery though!
Mick: So far, I haven’t slipped, but it will happen sometime
Tina: That’s good hopefully not!
Mick: Once when I was a postman, all the snow and ice had gone, or so I thought, but I found the last square inch of ice and went arse over tit. Bashed my elbow. Kept hold of the bloody mail though!
Tina: Oh no that’s sounds hilarious 😂 but I bet it hurt! Typical
Mick: Look what I just did

Tina: Looks good but graffiti is a shame, ruins the buildings. Oh my you’re having some walk
Mick: It is an eyesore yes
Tina: How was your brownie? Coffee any good?
Mick: Very nice it had a segment of Terry’s Chocolate Orange on top! Coffee ok but not the best, but at least the place was open
Tina: Oh that would be really nice. True and it kept you going
Mick: Look what I just made!

Mick: Should be home by 2.30 then it’ll be time for a coffee 😉
Tina: Ha lol 😂 looks like you’re back to where houses are!
Tina: Good timing
Mick: Yes far fewer people this way
Tina: Oh that’s good
Mick: Nearly home
Tina: Oh good I’ve just made a sandwich 🥪
Tina: You home ? 🏡
Tina: With your coffee ☕️
Mick: Yes I am, now with a coffee, thanks for joining me on my 5 mile walk!!
Tina: It’s quite alright was fun! There is nothing on tv so I’ll listen to the radio for a bit!
Mick: Me too in a minute, probably Radio 2 Sounds of the 70s
Tina: Well enjoy. I’m listening to Capital fm
Mick: Ah, Capital Radio in the 70s was terrific, it’s not really my taste in music now, enjoy, sing along, dance!!

Another day, another walk, another stop for coffee. You can pick up the feel-good vibes in Salutem.

I invited Rachel from Salutem to join me on my Radio Northenden show this week. And she very generously agreed. You can hear our chat plus two hours of music loosely themed around Shopping right here.

Martha told a wonderful story about a Witch and Gnome and a dragon that morphed into a dinosaur! We watched online of course.

Some highly visible men working by the sluice gates, after the deluge last week.

And so we come to the real highlight of the week. Salutem and snowman and spammy phone calls are all well and good, but nothing beats spending time with our grandchildren, William and Martha. Yes, SK8 was the destination for our first road trip for a long time.  We still have to maintain a safe distance of course, hugs are out of the question, we saw them from the end of the drive.

Martha knows that she only needs to dress the top half for her online schoolwork. Truly, a member of the Zoom generation.

And William insisted on wearing his backpack while scootering outside the house: maybe he thought he’d be going further away from home. He was doing sums. Just turned three years of age and he can do simple arithmetic. And he loves saying two and two equals four rather than just plain old ‘is‘.

We’ve been entertained this week by more online content, which is a horrible term, but covers everything from Netflix to gigs to Twitter and Instagram as well as videos of Martha and William. In fact, if you want to hear Martha’s sensational new hit single, please listen to this week’s Radio Northenden show.

We watched more of the Celtic Connections festival. I loved the Kinnaris Quintet especially, and enjoyed the very different Indian group, Jodhpur RIFF. Jessica Lee Morgan is still doing a weekly show on YouTube and from this Sunday, once a month also on Mary Hopkin’s YouTube channel.

Someone I haven’t seen live in concert for far too long is Tom Hingley, so it was good to catch him online performing in aid of the John Peel Centre in Suffolk, a small venue that we’re unlikely to attend in real life, but it was good to hear some of the old songs performed live from his home. His camera was cunningly placed to reveal a nice warm fire plus the gold disc on his wall. Well done, Tom!

And finally, some more good news: Liesel received her first Covid vaccination this week. I’m not expecting mine until March but the roll-out of the vaccine seems to be going well, so far. A second day out for the car this week. Maybe we’ll start venturing out a bit more often, if anything, just to keep the poor old thing ticking over and to stop the mould from growing on the outside!

Liesel also completed another blanket, her crochet skills are improving by the minute.

This really is a labour of love, I don’t know how many times Liesel counted the stitches in each row, just to make sure… and how pretty is it?