We’ve been enjoying some walks by the river while the Sun shines; and even when it rains, sometimes. No trips further afield this week, though.

I called it a rowan tree, Liesel said it’s a mountain ash. Who knew those two were the same thing? Probably everybody except me.

Our old friend, the heron, has returned after a few days’ absence. He tends to stand in the same spot by the weir, not bothered by the other water-loving birds.

Sometimes, the simplicity of an ivy leaf draws the eye. I suspect the owner of the garden behind this fence is desperately trying to cut back the ivy as it spreads.

We didn’t see our gorgeous grandchildren this week, but they had a lot of fun in the garden, and visiting Lyme Park and Quarry Bank Mill. Thanks to Jenny and Liam for these photos. Here’s William insisting that the sunglasses are on his ears. He might just have a point.

And here’s Martha rehearsing her rôle as Sister Maria. The hills are alive, with the Sound of Music.

Meanwhile, in a perfect example of rôle reversal, here is a big stick picking up a William. 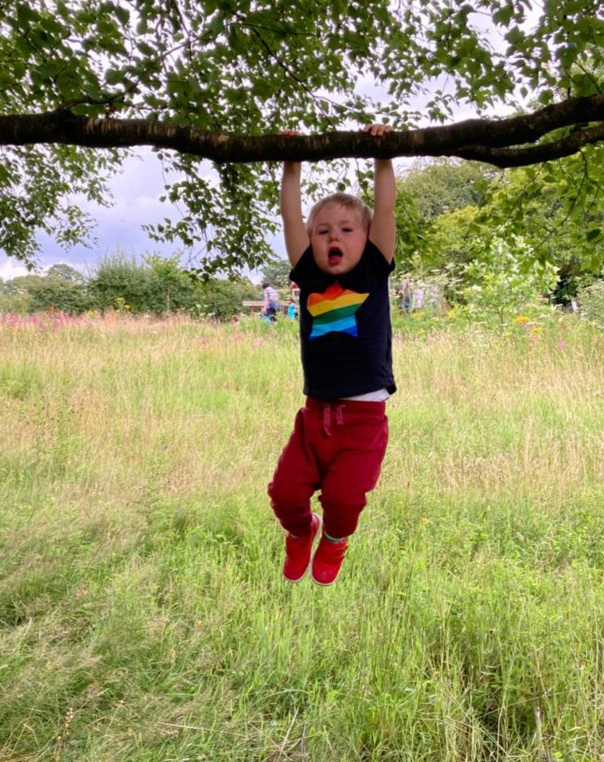 One day, we picked and enjoyed the first blackberries of the season. There will be a glut very soon. I think that’s the technical word. Unfortunately, we failed to locate the raspberries we’d seen a couple of weeks ago. Maybe we were mistaken, or maybe we were just too late. The apples in the woods aren’t quite ready for picking yet.

It’s fun and funny watching the geese walk up the weir, against the strong flow of water. Just as I’m vocalising this thought, one chap decided to show his wings off, after all. I’ll show you, Mick, he seems to be saying.

I’m no botanist but we think this might be an orchid*. Liesel didn’t believe me when I told her where the word ‘orchid’ comes from, nor what an orchidectomy is. The trouble is, when she doesn’t believe me, I can’t help but laugh even more, convincing her even moreso that I am making it all up. Which makes me laugh even more!

* This is not an orchid, after all. “It’s Himalayan balsam, an invasive plant that can take over river banks. It’s got explosive seed pods that send the seeds far and wide. As a conservation volunteer I’ve spent a few weeks pulling it up before it sets seed.” Thanks for your hard work, Ruth, and thanks for the information.

It was a lovely day to take a boat out. So somebody did. Not us.

Liesel spotted this heron on the golf course. Is it the same one? Or do we have at least two living in the area? As I told Liesel, a heron in golf terms means a score of 5 under par, but I’m not sure she believed me, to be perfectly honest with you.

There have been some fabulous innovations here in Northenden recently. We have a lot of rain, as I may have mentioned once or twice, so it’s good to see that, at last, the local authorities are installing bus shelters for very short, single passengers.

Liesel is making good progress with her crocheted blanket. Next time you see it, the last few rows may have changed. I think she quite enjoys unravelling a row or three and having another go, with different colour yarns.

I really hope this apple tree growing behind St Wilfrid’s Church is bearing Bramleys. Because then, it would be a bit like old man Steptoe: Wilfrid Brambelly. This old character was again brought to mind by a return visit from the local rag’n’bone man.

In other local news: our green, food waste bin wasn’t emptied this week. The new washing machine is doing a great job, and much more quietly than its predecessor. The 24-hour rainstorm proved too much for the gutters, again. The motion-sensored communal lights are again totally insensitive to any movement, staying on all day and all night. Radio Northenden has a shiny new website: watch this space.

4 thoughts on “Steptoe and Son”