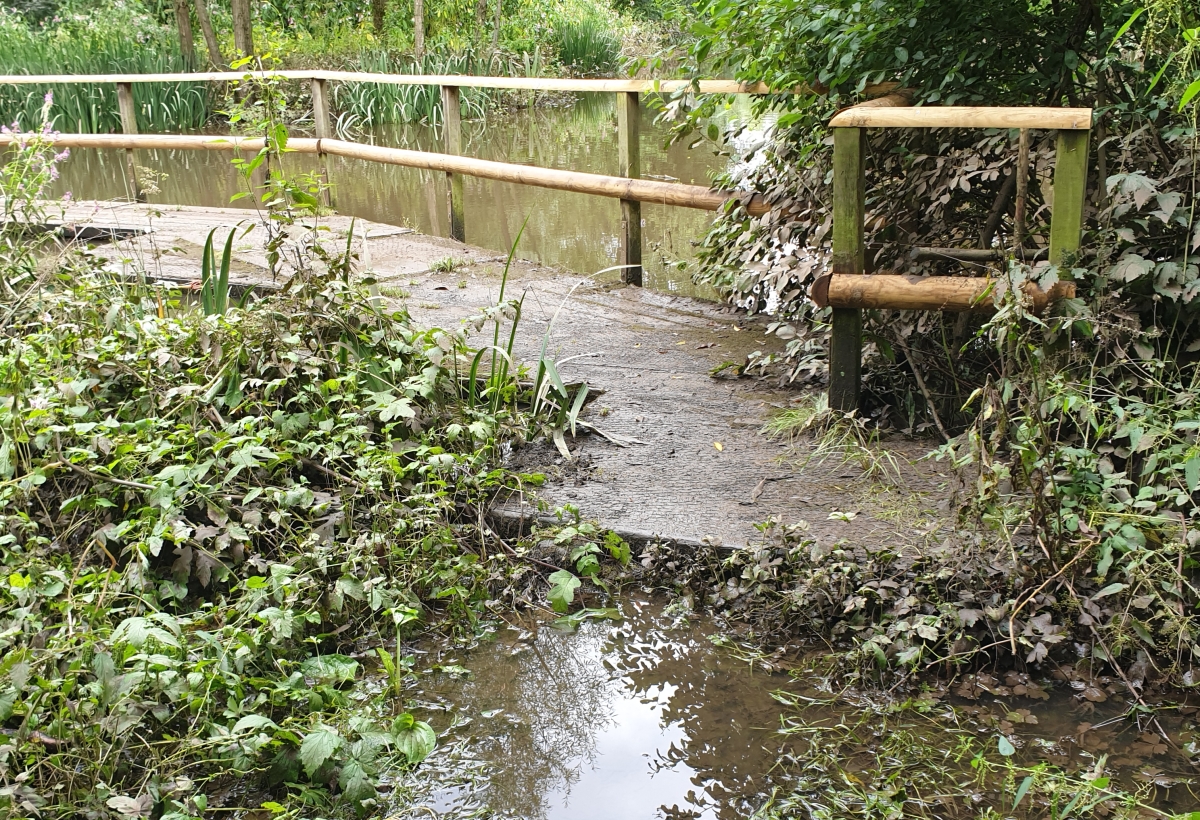 We moved to Northenden thirteen months ago but have only lived here for three. Our gap year adventures are still at the forefront of our mindss but we are now, slowly, building up some sort of routine.

Despite our best efforts in Chessington, we managed to move house with things that we now realise we don’t need. In the process of unpacking, we are finding items surplus to requirements. So, we are making use of Facebook’s local marketplace, eBay and eventually, charity shops, Freegle and any other likely looking outlets.

Any excuse to leave the confines of our flat is more then welcome. We were invited to look after William one morning so we took him for a walk. We visited Oak Meadow, a small park in Cheadle Hulme.

William kept to the path, which was unexpected, he usually darts off in all directions. But he was our little David Attenborough for a few minutes pointing out ‘dog’, ‘squirrel’, ‘birdie’ and ‘pigeon’.

He fell asleep in the buggy so Liesel and I had our coffee in peace.

We’ll never use the padded cooler/picnic bag again, so that was added to the list of things to pass on to a more appreciative home. Jenny was interested so I took it into Manchester where we met up for coffee. I had another reason for being in the big city though. Last week, Sean from the Blood Transfusion Service called asking if I would like to make an appointment. If you’ll still have my blood, I said, after I’ve been overseas, visiting many exotic locations in the tropics and beyond. A long conversation later, I made an appointment, and here I was, about to give blood again, for the first time in over a year.

I met a Rebecca, a Becky and a Rob, scar tissue from previous blood-lettings was admired. Some of my plasma will be used to make drops for people with dry eyes. Who thinks up these things?

A cup of Yorkshire tea, a Mint Club biscuit and a packet of Mini Cheddars gave me enough energy to walk down the road to the Whitworth Gallery. I had a quick walk round, but Liesel and I need to spend more time here.

Thursday is grandchildren day and this week, we took Martha and William to the Ice Cream Farm, near Chester.

Martha and William had a lot of fun in the sand and water play area, limited to one hour because there were so many other children around.

Yes, it’s the Ice Cream Farm but in the end, we didn’t have any ice cream. I remember ICQ being some sort of messaging service in the olden days, but now when we’re talking about the IC queue, we are referring to the hundreds of people waiting in line to buy an ice cream. We left the park just in time, missing the rain by just a few minutes!

Martha wanted to play in the bath at our place, so we took them there. They insisted on having water in the bath, too, quite reasonable, we thought.

After a longer wait than anticipated, we collected our re-framed pictures from The Framery in Gatley. While Liesel drove them home slowly, I walked back. I followed the signs to and through Gatley Carrs, a nature reserve.

One squirrel and one magpie isn’t much of a tally, and the only other humans I saw were a Mum with two children having a picnic. It was a pleasant walk marred only by the rumble from the nearby motorway. The path was muddy and impassable in places.

I was pleased to see a notice board listing all the water birds that must have been hiding quietly in the bushes. Maybe I’ll see them another day.

Just as I was thinking how devoid of souls this park was, I found some. Well, memorials to loved, lost souls. A pet cemetery.

The walk home took me across the motorway that borders the park. I was surprised where the path joined Longley Lane, I knew exactly where I was, and would never have taken any notice of that path if I’d approached from the opposite direction. I passed lots of nettles, an apple tree, some blackberry bushes and a supermarket trolley.

I am so easily transported back to my childhood, and today was no exception.

This signal box is, as far as I can recall, exactly the same as the one I had with my train set when I was very young. Well, it’s a real one here, whereas mine was OO/HO scale.

Also, I can easily burst into laughter as I walk along the local roads.

The local speed limit is 20 mph but everyone thinks this is the minimum rather than a maximum speed. I couldn’t stifle the chuckles as a number 43 bus took off at one road hump and landed beyond the next. I’m guessing 90mph, but he may have slowed down a bit because of a slight bend in the road where it approached the next bus stop.

This sign in FFS brings a smile to the old fizzog too, but it’s a little close to the bone, maybe. We didn’t walk to or from Didsbury on this occasion, due to lateness, laziness, idleness and lethargy. Not to be confused with the law firm of that name.

At home, I did install the new toilet seat. It’s one that has an extra, smaller seat for smaller botties such as those of grandchildren. It means we don’t have to hold them up while they do what needs to be done.

A straightforward, ten-minute job, you’d think. And it really was. I spent far too long trying to get it perfectly straight. But that was impossible. You’d think the cistern and the toilet itself would be in some sort of alignment. Oh no. If the back of the seat is parallel to the cistern, it doesn’t sit square on the bowl. It turns out, the toilet has been installed at a slightly jaunty angle. And, now we’ve realised, we’ll notice the imperfection every time we go into that room. Still, it’s one more thing ticked off the list.

Sunday is swimming day, always a joy to see William and Martha enjoying the water, once the spectacles have demisted in the warm, humid pool room.

From swimming in Hyde, we drove to Chorlton-cum-Hardy for breakfast and a walk. It felt muggy, rain and thunderstorms possibly on the way, but we had a nice stroll through the graveyard and along the banks of Chorlton Brook, which isn’t a law firm either.

As we walked through the woods, I said to Liesel that we just don’t see enough Chinese lanterns caught in trees any more. More fallout from the failed brexit negotiations, presumably.

But look, it’s our lucky day!

And just as we were thinking how drab and dreary some of the shops look in Chorlton, we came across this pair, necessitating the wearing of sunglasses for a moment.

The Pun of the Day award goes to this estate agent