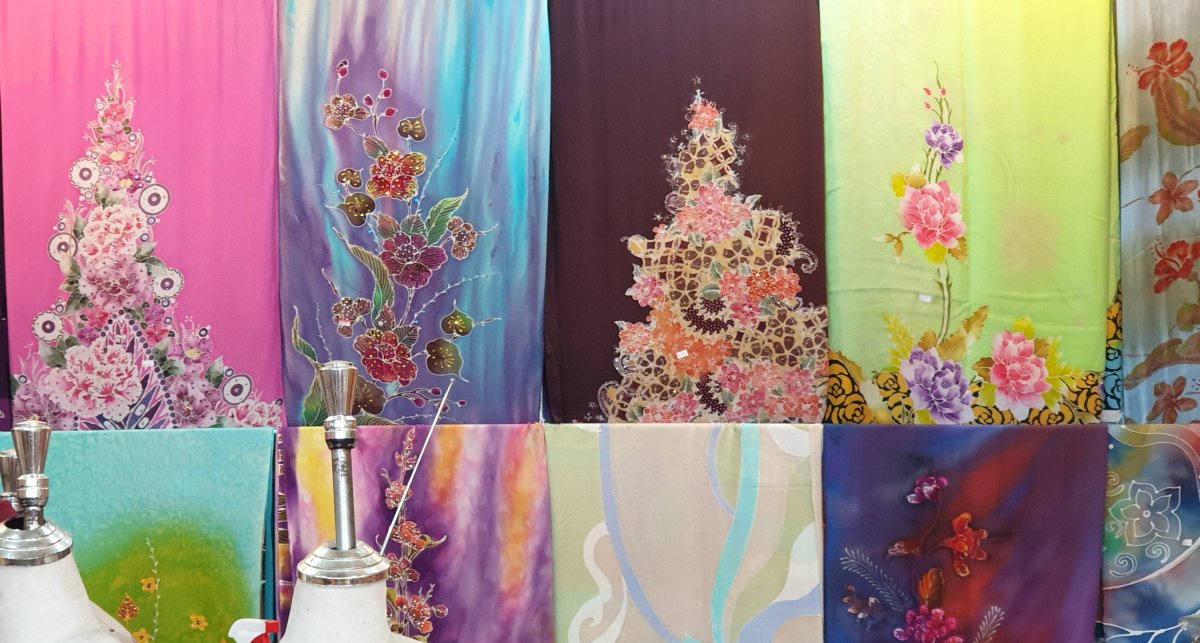 Admin is a fact of life, even in exotic locations. We took a couple of days out, messing about with the phone, booking flights and accommodation for later on, processing a pile of paperwork and discarding most of it. This post completes our stay in Kota Bharu but the next one may be delayed: we have limited wifi, restricted 4G, dodgy electric supply and who knows what other resources may be lacking? But that’s in the future, here is the recent past.

The State Museum’s new exhibit is now open. It’s a time tunnel comparing Kota Bharu old and new, then and now. Unusually for a museum exhibit, this one had more photographs than actual items to look at.

One thing I did like was the old, well-used typewriter, with a very wide carriage.

This painting adorned one wall but there was no descriptive label.

A couple of men were walking around the museum with a handful of labels but they’d either forgotten the sticky tape, or they really didn’t know which label belonged to which item. I could have told them, obviously, but not while keeping a straight face.

The ploughing equipment was all made from wood. The plough itself, also wood, is pulled by a buffalo.

Believe it or not, this small cave is a mock-up of the real Gua Cha, the site of a 10,000 year old settlement. We didn’t know if we were allowed in, but as I approached, the lights came on, and we were totally awed by the 10,000 year old technology.

We’d missed out on seeing a local, wayang, shadow puppet show, so it was interesting to see examples of the puppets here.

Very simple design, you don’t need much detail if you’re just projecting shadows onto the screen.

We walked to a local market and stopped for a coffee in Muhiba Restoran and Kafe. The temperature was 34° but it felt like 41° according to the weather app. I think we’d have guessed a higher number, just comparing it to what we experienced at Uluru.

The market was huge. We liked the fabrics that were on display, all very colourful.

We weren’t so keen on the food stalls. The fruit and veg was a bit smelly, the fish stalls a bit stinky. We turned a corner and walked into a wall of stench. We saw the meat being hacked and cut up and I’ve never seen so much blood. We reversed PDQ trying not to let our abject disgust show on our now even more pasty white faces. We didn’t need to walk in and witness an abattoir. Definitely a lowlight of our travels.

But the hanging cloth was pretty, hiding a grubby little alleyway.

We walked back to the hotel, still expressing disbelief at each other: how can people even eat meat? How can people bear to work in that sort of place? And a hundred and one other variations on “yuck, that was horrible”.

Very grateful that we didn’t have nightmares.

I woke up early but feeling lethargic and yet itchy for exercise. We had breakfast just in time, before they closed up shop at 10.30. The Kelentan River isn’t that far away and I decided to go for a quick walk in that direction. The temperature was lower than yesterday, and it was overcast, so, slightly less uncomfortable.

Crossing the roads is a fine art. You learn to select the narrower ones, with only two lanes instead of four. One-way streets should be easy, but motorcyclists use the footpaths willy-nilly, so they’re not bothered about going the wrong way up a one-way street either. You still have to look in both directions before crossing your fingers, closing your eyes and running across.

The trouble is, when you open your eyes again, you see this sort of rubbish. Literally.

Plastic drinks bottles are all over the place. It’s very sad to see but as Stephen said the other day, the Malays and the Chinese just don’t care about nature or the environment.

Sorry to say, Kota Bharu isn’t as interesting a town to wander around as some others, at least, not the area close to our hotel. The other day when we drove across the bridge, the river looked like melted milk chocolate. Today, it was more the colour of Caramac, and I can say now that it tasted of neither.

I looked around and spotted a BBC. No, I am not referring to the Brexit Broadcasting Corporation. There was a big black cloud over there so I took the hint, and began traipsing back to the hotel.

Some of the street art is fabulous. Here is a depiction of the local martial art, silat, some top spinners and a dragon being trained.

There’s not a lot of greenery here in Kota Bharu. The small patch of grass I did find to walk on was, let’s say, scratchy. It was like walking on upturned wire brushes. Thank goodness at least I had my sandals on. But I did smile at the attempt to replicate the Batman logo on this decorative arch.

On my return to the hotel, I went to the gym. No, that’s not a typo. I used the hotel’s gym, aiming to complete my 10,000 steps on the treadmill. 2 km, 23 minutes later, mission accomplished. My heart rate increased of course, but never to the point of discomfort: that sense of breathlessness that sometimes occurs at the slightest hint of exercise. I felt I could have carried on all day, but walking on a treadmill is a bit boring, to be honest.

From the treadmill, I could see what we think are the only other two white people in residence right now. He was wearing a one-piece swinsuit, she was wearing a very teeny bikini. Even I know it’s not appropriate in this particular place to flash that much flesh.

The shower was very welcome and I feel much better now, thanks. It’s still warm, even with the AC on in the room, but hopefully the sense of lethargy and weariness has been hit on the head, for now.

We’ve realised that another thing that makes it hard to wander round this town is seeing the poverty. The Grab cab fares are ridiculously low by our standards, and restaurant prices are too. I’ve been tipping, but I’m not sure that’s common here in Malaysia. I hope I’m not giving off vibes, flaunting my wealth: but the alternative is to not tip when I’m expected to, then I’m a stingy westerner.

In the afternoon, we went to the Community Centre for some local entertainment. Our friend Roselan was the MC. In the audience was a young German couple and that’s about it. But the entertainment was very good.

The drumming was fun and they even let Liesel have a go. She’s got rhythm, that girl.

When I first heard the oboe, I thought the player must have a bag of wind, similar to bagpipes, but it seems he was circular breathing, like didgeridoo players do. There was never a pause in the flow of music.

The local, Kelantanese martial art, silat, is similar to tai chi. During the display, the two players move slowly and with purpose, but as time went on and the music became faster and more insistent, they engaged in combat. It made us jump back when they moved in our direction.

A long, long time ago, Sarah and I acquired a board game and I’d forgotten its name. The wooden board had several holes in it, a large one at each end and a series of six or seven smaller ones along each of the long sides. We had small sea-shells as playing pieces. Unfortunately, the instructions weren’t explicit enough, and we could never make up a good game. So how exciting to, finally, be able to play the game called congkak here in Malaysia. I think our (long gone) game was called Sungka, from the Philippines.

A couple of young muslim women showed us how to play, then invited the German girl to take over and later on, I started playing. We used marbles rather than sea-shells but at last, I think I know what I’m doing!

Top spinning is something I thought I’d find easy. Not these tops. They’re wooden, the rope is wound tight, looped round your wrist and you fling the top, it spins for a long time. Hah.

Once a top is spinning in the correct area, a second player tries to knock it over with his own top. Hence the name, Striking Tops. I had several attempts but never succeeded in spinning a top, but it was good fun trying.

More fun than the other activity I was invited to join. Dancing. I can’t dance. I can pick up a rhythm, tap my foot, drum on a table, but I can not dance. The video is embarrassing. Everyone else is totally out of step with me.

It was a fun afternoon. We looked at the artists painting lovely flowers, but we resisted the temptation to buy.

We managed to see and speak to Martha on this, her third birthday. The theme this year is Unicorns. She is fascinated by them and we can’t wait to see her in real life, dressed up as a unicorn, cuddling a toy unicorn, having riding lessons on a real unicorn.

We made one more trip to the Aeon shopping mall, to buy some supplies for next week. I would have picked eight discs, but we don’t have a record player and the island we’re going to isn’t a desert island. We dined in Vivo. Next, we’ll eat out of petri dishes, in Vitro.

Breakfast at the hotel has been good. I’ve avoided some items because I don’t know what they are. There’s a rice dish, nasi kerabu, which is a gorgeous colour blue. But I didn’t know if it was blueberries (OK) or squid ink (not OK) giving it that colour. So we looked it up.

Nasi kerabu is a Malay rice dish, a type of nasi ulam, in which blue-coloured rice is eaten with dried fish or fried chicken, crackers, pickles and other salads. The blue color of the rice comes from the petals of …. whaaaattt? Who knew such a plant existed. And how lucky that it was found in the first place.