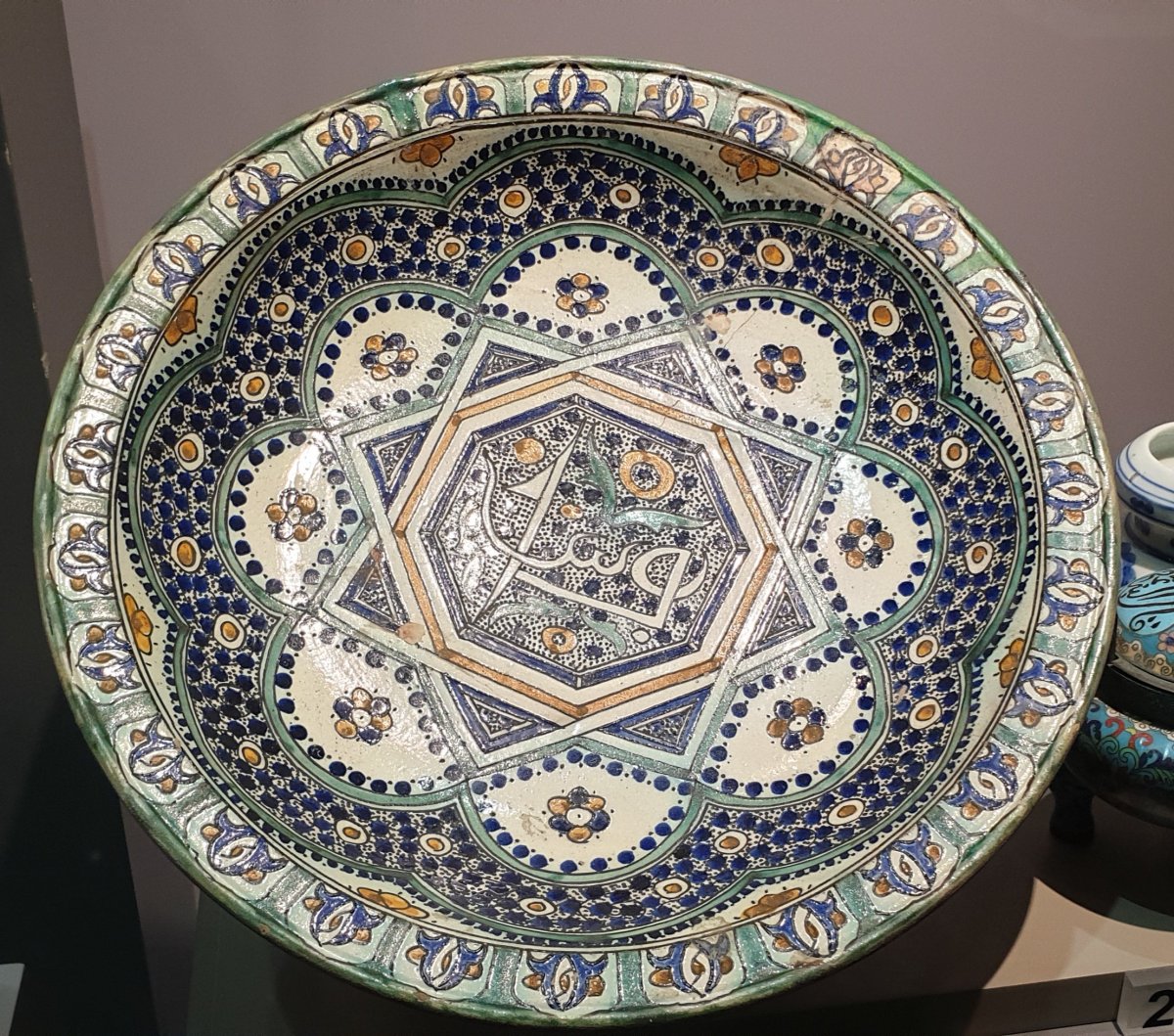 We’re staying in a complex here in Kuala Lumpur that includes a Creativity Hub. It could be a shopping mall but good for them, there are several ‘shops’ where people display their artistic wares and crafts instead. In the foyer, we found a diorama, a detailed model of somewhere south of Melaka, I think.

The sky is a lovely shade of blue which adds to the authenticity.

High up in the canopy, the heat was just as intense, despite the shade, but the noise from the city was slightly dampened. I can’t work out why it seems so loud in this city, more motorbikes, yes, but traffic is traffic.

After climbing all those stairs, it was a delight to discover that we didn’t have to backtrack and climb down. And neither did we we have to climb down at the other end. We exited the eco park at just the right place, very close to the Kuala Lumpur Tower.

What a shame we won’t be here on April 21st. Every year, there’s a running race up KL Tower’s 2058 stairs. I’d be up for that. I conquered BT Tower’s 1000 steps a couple of years ago, no problem. (In the end, there were only 870, sorry but thanks if you sponsored me: we were all short-changed!)

We bought tickets for the highest possible observation deck, the Sky Deck. In a world first, Liesel got a senior ticket. By mistake, I hasten to add.

As an aside, usually in restaurants, the waiters take a moment to understand that we both want to order the same item. I don’t know if we have funny accents, or their English is nearly as bad as ours, or if it’s really unusual in Malaysia for two people in a party of two to both order the same thing. Lots of questioning, checking, double takes. We get what we ordered, but the ordering process is unnecessarily troublesome. Here, at KL Tower, surpringly, “one adult and one senior” was interpreted as “two seniors”. Much to Liesel’s chagrin and my delight!

There are four lifts in KL Tower, one of which was out of order, so we waited a while before being transported up 300 metres to the Sky Deck. In a lift with 21 other people. After the 54 seconds ascent, it was a relief to be able to breathe again.

The view over the city was good, just a bit hazy so hard to see the hills in the distance.

I was surprised to see that the Petronas Twin Towers appeared to be just a little taller than the KL Tower itself.

Our tickets also included a Sky Box. I don’t know why they thought we needed a device to receive digital television broadcasts from the Astra satellite at 28.2°E, but that was just a misunderstanding. Here, the Sky Box is a glass box that overhangs the observation deck. You can walk on it, sit on it and have your photo taken on it. Nope. Palms are sweaty enough already, thanks very much.

Another surprise as we walked around the Sky Deck, edging past not one but two Sky Boxes, was spotting another pair of Petronas Towers. Who knew?

Palms sweaty enough already, did I say? Imagine staying at Platinum, going for a swim, and getting out of the wrong side of the pool.

Back down on planet Earth, we found our way to St Mary’s Cathedral. It started off as a cute little wooden church, and it is still expanding. It’s not big nor highly decorated but we were entertained by the organist for a while, in the cool. I recognised the tune he was playing, but couldn’t quite remember who wrote it. Bach? Maybe. Definitely not Vengaboys, thanks, Shazam! The pipe organ was built for the church in 1895 by Henry Willis who also made the organ for St Paul’s Cathedral in London and the original Grand Organ of the Royal Albert Hall.

It was a short walk to Dataran Merdeka, Independence Square. We didn’t see it at its best, due to building works. But next to the square is an early example of Moghul architecture in Malaysia. Known as Sultan Abdul Samad Building, it now houses a couple of government ministries. But just along the road is the National Textile Museum and this was our next respite from the heat outside.

We would love to be able to go for a long walk around the city, but we are, let’s be honest, wimps, and the heat is just too much. Added to which, every time you survive crossing the road is a bonus, just ridiculously stressful. But we enjoy museums, and this one especially is right up Liesel’s street. 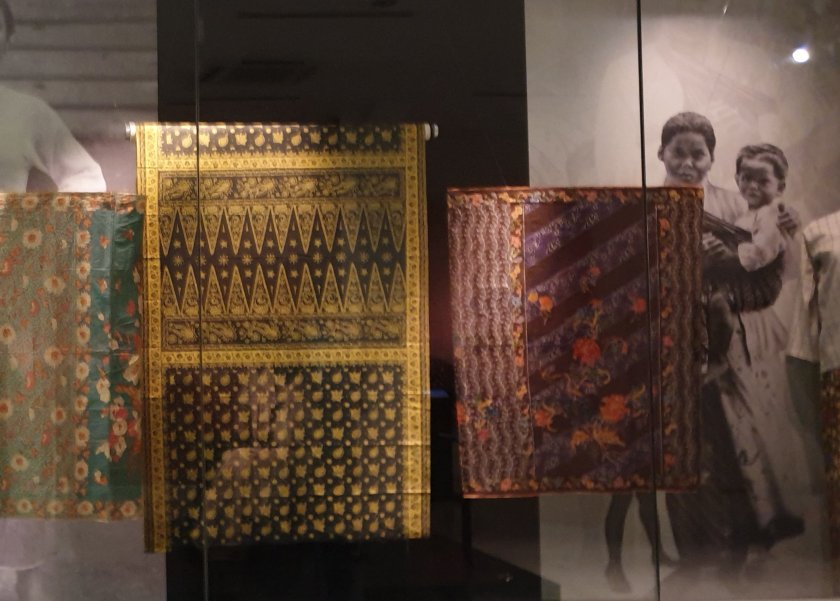 We discovered how batik is done: there are many more stages than we thought. Not something you can easily knock up at home.

There was some lovely jewellery here too. Here’s a preview of Liesel’s birthday present.

Round gold earrings with a central star design and studded with roughly-cut colourless stones. They were worn by Malay and Nyonya women in Melaka during the 1940s.

The Grab app to grab a cab works really well and the drivers are all very skilled at negotiating the traffic, the motorbikes, the jay-walking visitors, ahem. But there’s a competition to see who can have the most impaired view through the windscreen.

Stickers plus religious artefacts plus mobile phone plus everyday dirt all add to the adventure.

The National Museum of Malaysia repeats a lot of the history we’ve seen elsewhere. I feel so proud that the British came along to save the locals from the clutches of Spanish, Portuguese and Dutch invaders. Independence Day in 1965 is still a cause for great celebration. Merdeka! Merdeka! Merdeka!

What a lot of stairs to climb up to enter the museum. You think that’s bad enough? Wait until you see the stairs you have to walk up to access the disabled toilet!

Pengkalan Kempas is near Port Dickson and is the source of these monoliths: carved granite, known as “sword” and “rudder”, found near the grave of a sheik who died in 1467.

There were more royal seals here, and to pretend they’re older than they really are, the dates are given using the Islamic calendar. This is the seal of Sultan Omar Ibni Sultan Ahmed, 1286 AH.

The 100-year old Balinese Kris is a dagger, a weapon, but the workmanship of the handle is stunning. The hilt is in the form of a squatting Hindu deity with a decorative copper ring at the base.

Would I like a new pair of slippers for Christmas? Yes, if they’re as cute as these ones.

There’s a lot of history here in Malaysia, and as we discussed, Liesel and me, we’re so disappointed that none of this was taught us at school. Certainly my history lessons mainly involved the lives of the kings and queens of England. The East India Company was mentioned but only as a Great, British enterprise to be proud of. We were totally oblivious to other cultures, overseas, at that time.

So when we’re reading descriptions of the items on display, and reading stories, there are always references to people and places that are meaningless to us. The overall impression we have though, is that Chinese, Indians, Malays, all the various peoples in the region traded with each other, and all got along pretty well. Some people converted to Islam, some didn’t, there was no big falling out. Until the Europeans came along, maybe just to trade at first, but then to take over, to invade, to conquer.

It’s interesting to see how successfully Malaysia is managing, in its multi-racial, multi-cultural, multi-lingual ways. I’m sure there is an element of racism in some places, but it’s not as overt as it is in little England right now. Here’s funny thing: you have to read it.

So, Bat came from a cow’s vomit? I thought that was just Nigel Farage!

It’s time for Conundrum of the Day. The universal sign for a restaurant or a café seems to be an icon depicting a knife and fork.

But in Malaysia, in a restaurant, you’re usually given a spoon and fork to eat with. I use the spoon as if it were a knife, to cut and to push the food. We sometimes do get a knife and fork, but rarely. And there was that one time when I was given a fork and fork by mistake. Strangely, we’ve never been offered chopsticks, not even in Chinese places. Explain that!

The Mid Valley Megamall is as big and as bad as it sounds. It’s a short distance from the museum but the cab took ages to fight its way through the traffic.

While inside the mall, we missed the rainstorm. But we did walk up and down, miles and miles of shops, even though we had no intention of buying anything. Nice to see a ToysЯUs and a Mothercare, even though supposedly, both have gone out of business.

I did look in the bookshop for a Slitherlink Puzzle book, to no avail. Meanwhile, Liesel was walking around the furniture shoppe testing out the chairs (quite right too).

Every now and then, we detected the slight stench of durian, not very strong, but we were surprised they were allowed to sell such things in a mega mall. Liesel wondered why I was taking so many photos inside a shopping arcade. Well, this portrait was specially requested, even though M&S Foodhall didn’t have anything we required.

But the other pictures can provide plenty of fuel the next time your favourite radio presenter asks you to build a person out of shops’ names.

Yes, I did make one of them up!

And then, very nearly a disaster. I received a message from the service provider telling me that I’d nearly used up all my allocation of data! Not only that, my phone was down to less than 20% charge. There was a very real possibility that I might not be able to Grab a cab to get home. Luckily, I squeezed out enough bandwidth and energy, and we didn’t have to walk all the way back to our residence.

But we did walk home from the vegetarian restaurant where we had a nice meal, apart from the mushrooms that were made from leather so not totally vegetarian at all.

There must be something strange in the food here. If you’re not bovvered by other people’s dreams, you are permitted to leave the room here and now.

I was thinking about riding my bike to school. I remembered doing so before (I never did in real life) avoiding the main road, the A3100, but riding a road parallel to it. (There isn’t one IRL.) But as I was about to set off, I realised that I would never get up Holloway Hill in Godalming on the old 3-speed postman’s bike. (Holloway Hill is long and steep and they’ve now installed handrails on the steepest part, IRL.) This was on a Thursday and I knew that Friday would be my last day of school so I parked the postman’s bike by the house over the road (from my childhood home) and caught the bus to school as usual.

The sense of relief on waking up almost brought tears to my eyes. No school, no postman’s bike, phew.

2 thoughts on “Sky High in KL”