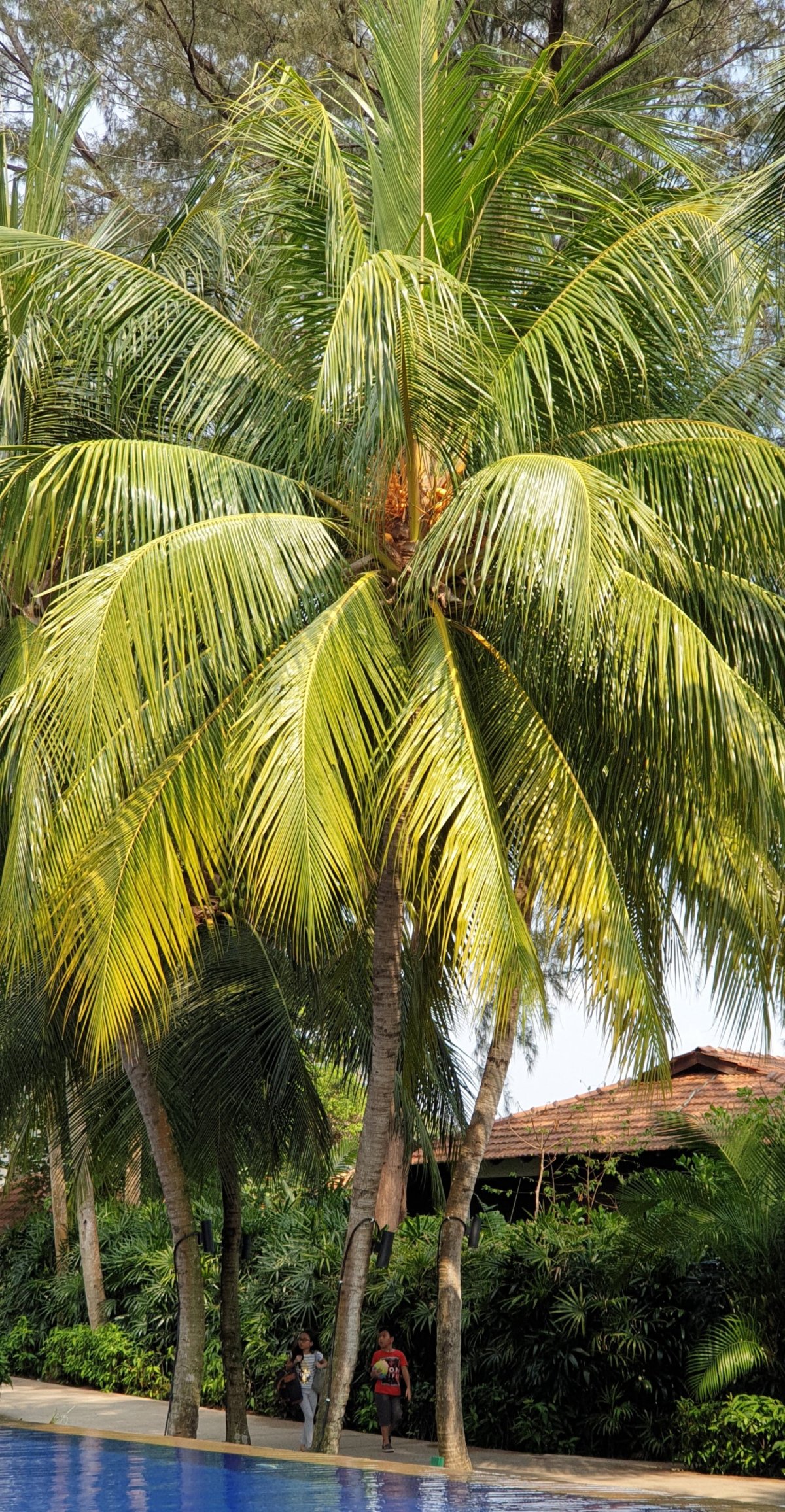 For a few seconds when I woke up, I forgot it was my birthday. Then I remembered. And then I remembered where I was. And the feeling of excitement and well-being totally out-weighed any sense of dismay at being yet another year older.

I enjoyed my birthday big bash bonanza breakfast buffet but I didn’t want to over-stuff myself. A massage was booked for 10am. I know: two massages within a few days! Happy birthday, me!

It was brilliant: she found all the usual suspects, pops and clicks in my muscles. The treatment included feet being washed and scrubbed, tea before and a pot of ginger tea afterwards, out on the balcony overlooking the sea. Wonderful.

There are a number of pools here at the hotel, and the biggest is for adults only. That’s where we spent most of the afternoon. Swimming, reading, napping. And repeat. Happy birthday, me!

This was our way of life for the next few days. Big breakfast, short walk, pool time.

We heard the rumble of thunder in the distance, but no storm materialised. We chose in the end not to climb the coconut tree as I’d suggested in my Facebook status.

I spoke to Helen and to Martha on the phone, despite the best efforts of the iffy wiffi.

Summertime and the living is easy. This feels like a proper holiday, by the sea, relaxing by the pool, enjoying cocktails in the evening. I’m not sure I would enjoy this sort of break for more than a few days at a time, but it’s exactly what the doctor ordered for now. A nice break from hikes, museums, city life. Happy birthday, me!

After such a big breakfast, we felt no need for a substantial lunch and even our evening meals have not been that large.

Other entertainment in the pool is provided by the swallows that dive down for a quick dip. I went into the water with my phone, hoping for a good close-up photo, but sod’s law: this was when the largest group of people we’d ever seen chose to use the pool at the same time. Five of them. So, no swallow photo.

Lazybones, sitting in the Sun, how you gonna get your day’s work done?

I went for a walk along Riau Beach, the one closest to our room. It was the busiest beach we’ve seen for a long time: we now expect to have a beach to ourselves! All sorts of people here and all doing normal stuff, burying their dad in the sand, digging holes, paddling in the sea, making sand castles, having picnics.

As it was a couple of hours before sunset, I tried for an artistic shot and this silhouette is as good as I managed.

There were lots of holes on the beach, possibly made by those little crabs I saw the previous day. Very clever, hundreds of little balls of sand expelled and probably a complex warren underneath.

My leg is just to give an idea of scale! Plus, that’s my birthday treat for you: the sight of my lovely leg.

Me mind on fire, me soul on fire, feeling hot hot hot. But nicely hot, not so uncomfortably hot that I can’t think nor concentrate nor do anything physical.

Entertainment from the beach was provided by a woman singing in the distance and by groups of people falling off their banana boats as the waves came in.

I saw a pile of bright yellow mangoes and thought I’d indulge.

Imagine my disappointment when I got close enough to see that in fact, it’s a rope of float buoys and not really edible.

So, a small evening meal, after cocktails of course, and there was room for dessert, the nearest we could find to a large slice of actual cake. Happy birthday, me!

In the middle of the night, when the tide was out, we saw a few people in the distance on the sand-flats, walking about with torches. We assume they were fishing for something very specific and nocturnal. But neither of us volunteered to go out and ask.

Hotter then a pepper sprout. But our room was air-conditioned and it really is much easier to sleep when it’s not too hot inside.

There is much less haze here than in Melaka too. The horizon is as it should be, a nice, sharp boundary between the sea and the sky.

Another big breakfast, another lounge by the pool, another distant rumble of thunder. We had coffee inside. Total excitement when Liesel knocked over her mango juice with the newspaper. It missed me, though (take note, Jyoti).

Liesel phoned her Mom and we found the wifi signal to be much more reliable outside, by the beach. Explain that, you technical people.

I went down to investigate the piles of sand along the waterfront.

Yes, worms, being dug up and later to be used as fish bait. Apparently, they’re expensive to buy in a shop.

In the afternoon, while I was busy attempting, and messing up, a new kind of puzzle in today’s newspaper, Liesel filmed the swallows.

She returned to our room while I continued with another puzzle (messed that one up too) and another swim. And while I was sitting there, minding my own business, there was a crash. A small coconut landed right by the pool. Followed closely by several pieces of bark.

I was so glad I was wearing my brand new hard hat. Happy birthday, me!

I don’t know if there was a monkey up in the tree, but someone was taking photos of the goings-on up above.

Peacocks can count to 6. We had one sitting close to us while we ate dinner, and every few minutes it would shout/squawk six times, never five, never seven, always six. But he never did find his mate.

Other fellow diners included a couple of geckos playing peek-a-boo around a lamp.

Still, I’d rather see them than what was outside our room: a dead cockroach.

All day I’d been trying a take a picture of a particular bird: dark, oily green in colour with piercing red eyes. Very timid, very wary of me and my camera. But I did get a bright red eye later on.

Other housemates include the birds that either live or at least spend a lot of time in the roof space above our bathroom. We hear their high-pitched calls and now we know the source of the noise, actually, it’s quite relaxing.

Spring has arrived back home but here it’s still definitely hotter then Hull, and it’s great.

As I write, it’s about 1:15pm, two days after my birthday. Liesel is having a massage while I’m sitting here, outside, in the so-called Author’s Recluse. Yes, I’m pretending to be an author. Or maybe I’m a recluse.

Every few seconds, I have to blow an ant or a small spider off the keyboard. From behind, I can hear a cockerel and some other small birds. In the opposite direction, the call to dhuhr, midday prayer has just finished.

I’m under a shade so quite cool. And this is the terrible view I have.

Now and then, there’s a slight smoky smell, but not as strong nor as pungent as in Melaka. And the whiff from the petting zoo sometimes wafts this far too. But, this is great, there is no smoking anywhere at this hotel.

Bad news: later on, we did see a cigarette butt on the path.

The only thing we missed on my birthday was joining the two million other people marching in London campaigning for a People’s Vote on whether or not the UK should leave the European Union. Now that we know what Brexit actually means (“Brexit means Brexit” was always bollocks, PM), let’s have a proper, informed decision, since the government have totally messed it all up.

I have signed the petition to Revoke Article 50 too. I was about number 170,000. As I write, there are over 5 million signatures. If you haven’t signed, here’s the link. Please sign even if you disagree with the petition, it’ll be alright, honest. (Another little lie for brexiters to fall for.)

A march and a petition: maybe futile gestures in the face of a PM desperate to cling on to her job and who puts the unity of her political party before the interests and well-being of the country as a whole, but someone’s protest, someone’s signature just might be the tipping point we need.

I apologise for a rare and brief political rant. Happy birthday, me!