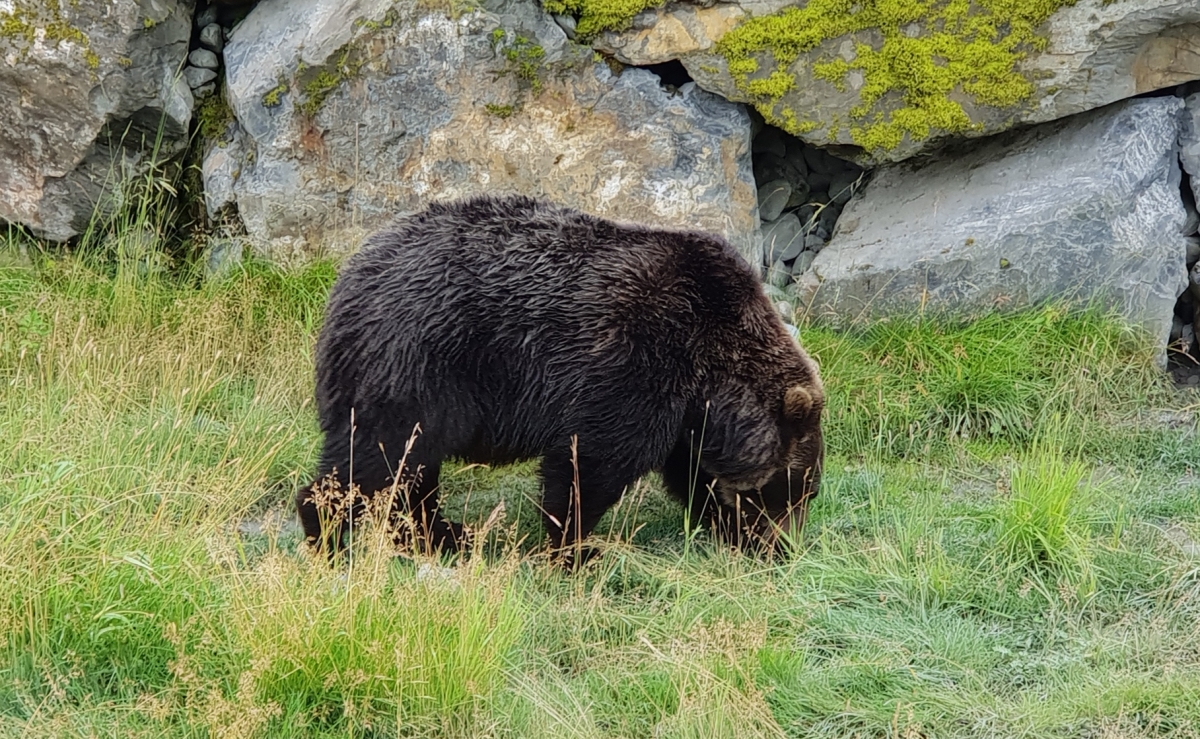 Mick is hoping to purge this earworm by mentioning it here. Anchored Down in Anchorage by Michelle Shocked is a great song, but I wish my mind would concentrate on a different one about AK or preferably, about something entirely different.

Monday was a day of rest. Asa’s interested in cookery and he scrambled some eggs for our breakfast. And we went out for some shopping, stopping at a coffee bar, of course.

In the evening, we went to collect Gideon from his football practice. He enjoys playing in goal but for the time we were there, all the play was at the other end of the pitch. As I walked back to the car with him, he was dribbling his football and his control was very impressive!

The field has several colonies of mushrooms should they get hungry during a game.

The next morning, we went to the gym where our 12-year old Training Assistant, Hannah, got us to do some exercises. And tried to sell us more services, of course. We’d rather be outside walking or cycling but the weather recently has been a bit damp and the immediate forecast doesn’t look too good either. But we do need to build up strength and stamina before our long trek in Japan.

In the coffee shop afterwards (it had to be done!), we bumped into Suvan: we were planning to see him later in the day too at his Mom’s house.

In the afternoon, we took Asa and Gideon to the movies. Christopher Robin is very enjoyable, very gentle with some nice nods to the original Winnie the Pooh stories.

We went round to Jyoti’s in the evening for her gorgeous Indian food. Suvan was there too with his gorgeous new bride Kayla.

We took Asa to the Alaska Wildlife Conservation Center at Portage. Gideon didn’t want to come because the animals make his hands smell. Which may be a euphemism for he wanted to stay in to play computer games. The weather was dry but a couple more degrees of heat would have been welcome.

The Center does take in orphaned and injured animals and, for us, provided a good way of seeing some genuine Alaskan wildlife albeit in an artificial setting.

On the way to AWCC, we stopped at the Alaska Bakery. I have never been defeated by a cinnamon roll before but this one was enormous. Cinnamon roll?It was a brick! I ate it in three sessions during the day. Yes, I should have taken a picture of it.

When we got back home, Liesel and I went for a quick walk up the road with the dog who was limping a bit and she knew when she’d had enough. It was just great being outside for so long today.

It’s not every day you get woken by the phone ringing at 7.00am. It was the crew delivering the new dishwasher and the new oven telling us they were on their way. We both stayed in bed until they’d gone.

Jyoti called as well to say she was coming over at about 9am and as it was 8.45, I knew I had plenty of time: she is Indian after all 😉 but she showed up just a few minutes later, and the three of us went for a walk to Kincaid Park and around the trails.

Asa and Gideon went for a quick bike ride to Kincaid too, and on their way back home, they told us that there was a moose around the corner with her baby. We didn’t know how the dog would respond so we turned back, and found a different rute through the park.

We found Beercan Lake, aka Campbell Point Lake, the location of our marriage ceremony all those years ago.

In fact, we realised it was exactly our 12½th wedding anniversary, half a silver!

After the walk, we went to a great resaurant called South for a late but very welcome breakfast. I liked one of the paintings on the wall but Liesel thought we probably wouldn’t be able to afford it. So I snuck a photo instead.

In the afternoon, we took both boys to Color Me Mine, a paint your own ceramics shop. It was a lot of fun but it’s fair to say that other customers had more artistic talent than we do. The items will be fired in the oven and we’ll be able to collect them in 7-10 days.

I don’t think I’ve played Monopoly for a quarter of a century or more but the rules came right back to mind. We played the Alaska edition which was fun, but the funniest thing was, Gideon’s cheating was more blatant than Asa’s. Even so, I was declared the winner in the end because I had more properties. But, really, the game lasts far too long for young folks and I even thought that when I was myself a young folk.

The Alaska edition has groups of land mammals, sea mammals, cities, natural features and the Chance and Community Chest cards have been given an Alaskan flavour. No “You came second in a beauty contest” here, it’s “You have won second prize in the miners and trappers ball costume contest”. You can go to jail for “exceeding legal fishing limits”.

2 thoughts on “Anchored Down in Anchorage”