Wednesday was the thirteenth anniversary of Liesel moving to England. We didn’t mark the occasion, mainly because we didn’t remember until the following day. Oh well, maybe next year.

But we did have a fantastic and fascinating 9-hour long trip on board the good ship Lu-Lu Belle.

It was raining when we walked across the road to wait, under cover, for departure at 11 o’clock. It rained on and off all day, but that didn’t detract from our enjoyment of the cruise and everything we saw. Captain Fred Rodolf has been cruising Prince William Sound since 1979 so he’s had plenty of time to perfect his commentary which was both informative and very funny.

He was very proud of the oriental rugs on Lu-Lu Belle, so we passengers all had to wipe our feet before going on board.

Just one of the oriental rugs

A boat’s wake is so-called because it wakes up any sea otters that happen to be asleep as the boat passes by.

And we did indeed wake up a few otters, in cold water, yes, but snugly warm with their 100,000 hairs per square inch.

We saw Valdez Glacier as we left the harbour, just, through the mist and the haze. Fred told us that the Valdez we’re staying in is not the original town. That was destroyed in the 1964 earthquake. But why is there a place here at all? Because it’s the northern-most, totally ice-free harbour on the Pacific coast of America. It gets very cold but the sea doesn’t freeze here.

We passed by Glacier Island where we were met by the sight and the stench of sea-lions, great big lumbering slugs lolloping on the beaches.

Fred told us several times that sea-lions weren’t very popular because they eat the salmon. And the Alaskan salmon industry is second only in size to its oil industry. The salmon population is closely monitored and if one year, not enough salmon return to spawn, then the permitted catch is reduced accordingly.

Further around the island, the boat nosed into several caves, yes, actually into the caves, to try and find some puffins. It was delightful to see them high up, nesting in the caves but it was impossible to get a decent photo from a moving boat while looking up, trying not to fall over and desperate not to drop the phone.

It really is a puffin

Pictures of humpback whales turned out a bit better. There was more time, they were further away and I was more steady on my feet. One of the whales resurfaced pretty much every seven minutes, but where he would appear was anyone’s guess. 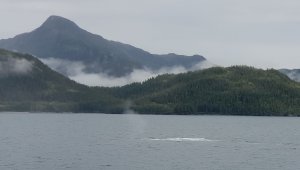 One of the other passengers was eating ‘gorp’. I don’t know if that’s a well-known term for it, but trail-mix really is a different animal in these parts. At home, trail-mix is just a mix of nuts and dried fruit. Here in AK, it has nuts and raisins, yes, but it also includes little chocolate chips as well as M&Ms.

As we approached Columbia Glacier, we saw ice-bergs. Mostly quite small but there were some large ones too. Their blue colour is lovely, brought about by refraction in ice when all of the air has been squeezed out. 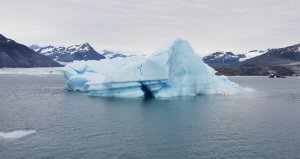 Approaching the glacier was something I never thought I’d do. Columbia has retreated several miles over the last forty years, and the leading edge is a mile and a quarter wide. From a few miles away, we could see mountains behind but as we approached to within a quarter of a mile, its 200 feet height obscured those mountains from view. That alone gave us an idea of the immense size of the glacier.

We heard chunks of ice crashing into the sea before we saw any calving. As close as we were, sound still reached us too late to be able to turn and look at the right place. It was a bit of a guessing game, but I think everyone saw a few splashes. A couple were big enough to generate waves that reached our boat, but, thank goodness, not strong enough to threaten us in any way.

Captain Fred let us watch the glacier and the calving for a good hour and just as we left, a tall pinnacle detached and fell over, though not while I was filming.

Klaus will talk to anyone and everyone and somehow the crew discerned that it would soon be his and Leslie’s 50th wedding anniversary. They wanted to do something to mark the occasion, but as only one of the happy couple was present, Klaus received the gift of a free muffin!

Yin and yang, though. At some point when Klaus was on deck, the wind carried away his favourite cap, depicting Oregon Ducks, the football team of Leslie’s alma mater. American football, that is.

In the evening, for the first time in AK this trip, we dined out. Fu Kung Chinese but also Japanese, Vietnamese, Thai and presumably other oriental cuisine.

The following day when I went for a quick walk before leaving Valdez, I bumped into Captain Fred again. I asked him to keep a lookout for Klaus’s cap. He said he would, it’s probably being worn by a sea-lion though!

We had to check out of the campground in Valdez by 11am, much earlier than the state-run places, but at least we had good weather for much of the journey today. We had planned to camp one more night, by Lake Louise, but in the end, it was decided to go all the way back home to Anchorage. Klaus thought nothing of the four-hour drive, but then there is a lot less traffic here on the highways than we have to contend with on motorways between London and Manchester.

Being able to see the sights today was wonderful too. The Horsetail Waterfall was very popular with visitors.

We saw lots of lakes and glaciers and mountains as we drove westwards along the Glenn Highway. In places, it looked like a sheer drop to the left, the other side of the road.

The trees were noticeably different from place to place. Tall, bushy white spruce and birches were dominant in places. But in between, where the ground was swampy and the roots less strong, the trees looked really weak and feeble. These are black spruce.

When I saw black spruce a couple of days ago, I thought they were just trees recovering from a bush fire: not much foliage yet and blackened, wizzened trunks. But no, this is what they really look like. If you imagine a nice, thick, leafy spruce as being a healthy, well-fed fox’s brush, then black spruce are the tails of mangy foxes.

We were delighted to see a few groups of cyclists on the Glenn Highway, including one group of about six German girls. They were all doing well even though the road was quite hilly in places. Helped of course by the decent weather we were all enjoying.

I learned something else in the last few days. Where the road is rollercoaster-like bumpy up and down due to melting frost below the road surface, the term used is ‘frost heaves’.

We arrived back home about 6.30pm, and after a chat and something to eat, Mom and Dad went to bed and for the first time in nearly two weeks, the TV was turned on. 666 channels of absolute tosh. Liesel settled for a Harry Potter film.