After two nights staying at Jenny’s place, we are tonight sleeping on the blow-up bed in our own luxury apartment. There are only 32 stairs, not the expected 40, I don’t know where we got that idea from but the 20% reduction in climbing is a bonus.

It’s still hot and sticky and even after the long, long, wet Winter, we are being threatened with a hosepipe ban. But that’s ok, we no longer have a garden and we have passed on the garden hose to a nearby daughter with a nice garden to water sometimes!

The removal men were fantastic. They lost several pounds in weight by lugging all our stuff up two flights of stairs. I was on the phone when they arrived at Jenny’s to drop off a few crates, all Jenny’s and Helen’s old, old, old schoolwork, toys, books and so on. So Liesel drove to our flat to let them in there. I followed a bit later, walking the three and a bit miles. It was a nice, quiet walk, mostly through residential neighbourhoods. But then, the last half mile or so was a bit smelly. The tip is quite close and it was ripe. This would be a good cycling route, in the future, so that’s good!

Sainsbury’s on a Wednesday morning here wasn’t too frenetic, compared with all the supermarkets local to Chessington which seemed to be incredibly busy all the time, which is why we’ve been using Ocado for the last few years. A nice group of robots do our shopping for us and then a nice (usually) man (usually) delivers it to our door. We are not being paid for this endorsement of Ocado.

We rearranged the boxes and crates, seemingly hundreds of them, so the flat is now much more ordered. I rebuilt some items of furniture and there were no bits left over. Bonus! Liesel is making the best of a much smaller kitchen than we had before, but like most things, we’ll get used to all the differences, in time.

It was a delight to find and unpack one of our fans. We really need the air to move around, especially late afternoon into early evening, when the Sun shines in through the living room windows and the two main bedroom windows. It was even better to locate the second fan, so tht’s now cooling down the bedroom where we’re sleeping tonight.

Last night, we watched most of the World Cup football game between Colombia and England. As a Kirsty McColl fan, I was really hoping the score would be England 2 Colombia 0, but sadly not. England won the penalty shoot-out (hooray!) and will play in the quarter finals on Saturday.

Wimbledon tennis championships started this week too. But the sporting event we’re both looking forward to is the Tour de France, which starts on Saturday. Chris Froome is trying to win for the fifth time. And the good news is, we’ll be able to watch it on TV because that was unpacked, connected up, plugged in and retuned late yesterday afternoon. Priorities: get the TV working! But, really, we just wanted to be able to listen to the radio, which we can do via Freeview. We do have some actual radio sets somewhere, but despite some fairly rigorous labelling, all the boxes look the same after a while.

So here we are. New digs. It feels a bit like being on holiday at the moment, living in a strange place.

Liesel’s had enough though. She’s going back to Chessington tomorrow: she set up the Hook and Chessington WI Evening Book Group a few years ago and tomorrow she will attend a meeting for the final time. Will she finish this month’s book? There’s a two-hour train journey, so there’s a good chance she will!

I’ll be continuing the administrative chores: informing organisations and businesses of our change of address. Some have been very helpful and it’s not been a problem. Some have proved more difficult though. Naming no names. I’ll set up my PC tomorrow too, in anticipation of being connected to the internet. Which might take another week. Why so long? I have no idea. It’s not like they have to send an engineer round any more.

One advantage of moving away from Chessington is that we no longer have to look at the eyesore that is Tolworth Tower from our back bedroom.

Instead, we have this… thing… to look at! Oh well… 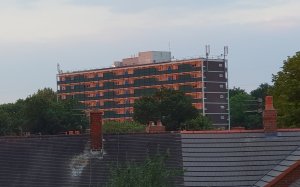 I think the Peak District is roughly in that direction so I hope this… building isn’t blocking the view, that would be really unlucky!