This weekend has seen the return of the so-called Beast from the East. The Russians are sending over their coldest wind again, resulting in more snow and a drop of ten degrees in temperature between Friday and Saturday.

But that didn’t stop me from going for a walk to Victoria Park, Surbiton today, to do something just a little bit scary.

I haven’t cycled in the snow for many years, possibly not since I had to for work as a postman. And on my own bike, probably not since I commuted into Kingston.

And I have never ridden a penny farthing. A kind of bike that Liesel didn’t even think was real until a few years ago.

But that all changed today: I had a go on a penny farthing. Around a snow-covered football field. Not a full-size, genuine Victorian one, but still high enough to give me cause for concern.

There’s a small stop half-way up the main stem, and you’re supposed to swing your other leg over and start pedalling straightaway. Well, I didn’t, and promptly fell over on the first attempt. With help, I got going and probably cycled between a quarter and a half a mile, being chased, I mean, followed by the bloke ready to catch should I fall off again.

Going along was OK, but stopping and getting off again was quite hairy. So, just like flying a aeroplane, starting and stopping are the difficult periods. 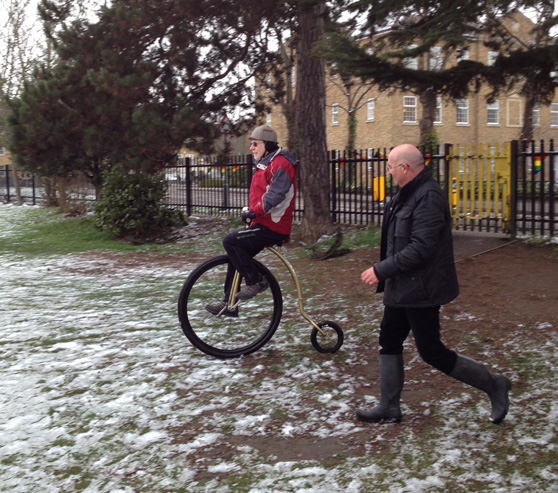 Baby ones for little people 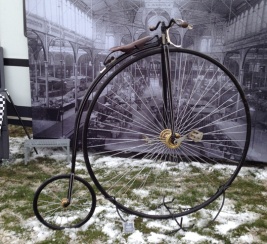 The event was to celebrate Cycling in Surbiton which was home at one point to a High Wheeler Race Track. Part of the Wheels of Time celebration of cycling in the Royal Borough – for which I partook in the interview last week.

Pauline and I were in Kingston a couple of days ago, following our two days in London. She wanted to see some ‘old things’. So I showed her a mirror.

Then we saw the Coronation Stone of course. And we spent some time in Kingston Museum which has some really old stuff.

Meanwhile, Liesel is counting down the days: just eight more with her current employer. Then our big adventure can really begin. We can deal with the practicalities of moving house while planning our gap year travels for real.

One thought on “Beast from the East 2”