The first thing I saw when I got up this morning was a spring. On the floor. Ah, a metaphor, I thought, Spring has arrived. And indeed, the sun was out, the sky was blue, it’s significantly warmer than last week and it was quite pleasant to walk around Chessington and Kingston today. 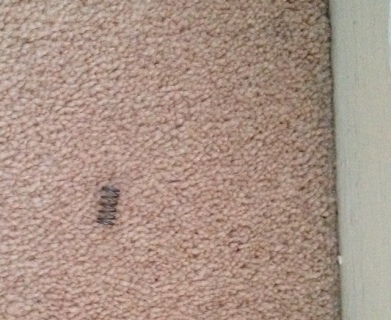 But it’s a bit worrying, finding a small spring. Where did it come from?

Well, the house continues to fight back against being taken to the knackers’ yard. In our bedroom, there is a built-in wardrobe. One of the doors hasn’t closed properly for years, not since the last time thse doors were painted. There’s a little catch that should click smoothly and keep the door closed. With a bit of a slam, the dried-up paint flaked off, and that door managed to close properly and satisfyingly.

Until today. The little catch has broken. The spring sprung loose and the rest of the plastic must have shattered. I don’t think there’s any way to fix it.

Unlike the stay at the top of the front door. I replaced that, after the estate agent had problems last weekend. So unless there’s (again) a very strong gust of wind, the front door should no longer swing open and bash into the window sill outside the fron room.

Probably tempting fate but the door bell is still working a week or so after I fixed it and sealed it in again, despite the snow and rain. Touch wood.

No more news on the home front.

“Wheels of Time” is an exhibition aiming to document the story of cycling past and present in Kingston upon Thames. An important part of this will be people that cycle as part of their job.

I was invited to be interviewed in my capacity of ex-postman. I used a bike for the job, and they wanted me to talk about it. So I visited Kingston History Centre in Kingston’s Guildhall for the first time where I met Alex, the Heritage Services Officer, and Jarek, who conducted the interview.

I don’t think I slagged off Royal Mail management too much for the decision to replace bicycles with trolleys. Big, fat, red High Capacity Trolleys. But it was fun to talk about why I liked the job using the bike, and not so much with the trolley. The changing nature of the job over the years, especially with regard to online shopping resulting in many more parcels and packets being delivered by Royal Mail, is I think not recognised by most members of the public. And dogs came up. Like the one that didn’t like the noise the bike made. Or the one that didn’t like my helmet.

The exhibition opens towards the end of the month and I’ll put more details up nearer the time. I think this is the first time I’ve potentially been a museum exhibit.

I’m ashamed to say that I didn’t cycle into Kingston today: it was quite nice outside but I didn’t want to turn up looking bedraggled, with helmet hair and stinky.

Oh, alright: it was too cold. I’m a wimp. Turning into a fair-weather cyclist.