Walking around the streets of Paris, it’s easy to make comparisons with London. We’ve seen far fewer rough sleepers, just a couple really. But there are many more beggars, each with a much-used old paper cup with only a couple of coins in at the most. Some have dogs but most don’t. What most of them do have, that beggars in London don’t have, is a nice, big, comfortable cushion to sit on.

Another ploy is to come up and ask you to sign a piece of paper. You assume it’s a petition so you read it. Then you find out the person is ‘deaf and mute’. They’re asking for money and you’re supposed to indicate how much you’re donating when you sign. You’ve got to admire their bottle, but, pretending to be deaf?

And on the Metro, we’ve been privileged to have heard three different speakers presumably asking for the price of a coffee or a small contribution for their lodging tonight.

Ignoring all these people, some of whom may be in genuine need of help and not really just trying to fleece ‘tourists’, is tough. But I’m not really a bad person. I made friends with a tiny, old French lady in a bookshop who couldn’t reach what she wanted from the top shelf. We agreed that it was nice buying books for grandchildren, but that’s as far as my French language skills went.

The other problem we have is that our phones lose charge and we don’t have the correct adapter to charge them. I looked in an Apple shop that we happened to pass, but 25€ for a plug with an Apple logo seems a bit OTT. Fortunately, Monica came better prepared. So, my phone is fully charged now and my thumb is typing away and sometimes hitting the correct letter at the first attempt.

Earlier today, I was alerted to a new voicemail message. When I called to listen to it, the nice man said there weren’t any. However, I did retrieve it later, and a second one, both from our estate agent, asking me to call back.

Two more offers have been received, neither of which we want to accept right now. Someone really wants a downstairs toilet but doesn’t want to spend £25,000 installing it. I’m assuming it’s Donald Trump looking to install a gold-played one for that price. Another one wants to rent the house out but wanted to buy the house for a small amount, cheeky devil. There are a couple more people due to view the house later in the week. Yes, it does feel weird having hordes of strangers looking around our house while we’re not there, but equally, it feels wrong when we go and look at other people’s houses and flats.

Meanwhile, back here in Paris, many of the museums and other attractions are closed on Tuesdays. So yesterday, we all went for a long walk, via the Hôtel des Invalides and the Musée de l’Armée. Napoleon’s Tomb is in a church nearby, but we didn’t pay to see it.

We caught a bus, when we eventually found the correct bus stop, to start the main mission of the day: a tour of chocolate shops!

Lots of free samples were enjoyed of course, and we all bought a lot of chocolate to take home. How much really gets back to England, well, we’ll see.

Bon Marché is a big shop. Liesel, Monica and Neha looked around while I took refuge in the book department. I’m reading A Tale of Two Cities right now, it seemed appropriate, but I couldn’t find a French translation. This is where I met the little old French lady, by the way. I went for a coffee because the seats in the café were more comfortable than those in the book shop itself.

Today we visited the Louvre. It’s huge. I wanted to see he Mona Lisa of course, it being the star of a few stories that I’ve enjoyed over the years. Liesel enjoyed the Egyptian section, stuffed cats, stuffed crocodiles and all. I looked at a lot of Italian art and it was nice to see that not every Italian painting from the olden days is a Madonna and Child, which is what I remember from Florence, especially. The Islamic art was also interesting, and I learned a lot about Arabic script.

Yes, I was moved by seeing Leonardo’s most famous painting in the flesh, but it’s sad that it has to be hung behind a thick layer of bullet-proof glass.

We were hoping to take a boat to the Eiffel Tower but the river was flooded, the jetty and many riverside restaurants were under water. Literally, in Seine.

Wild is the Wind. Really wild. And very cold. So while I’d wanted to climb the stairs initially rather than taking the lifts, in the end, I was quite glad I didn’t. The cold wind went in one ear and out the other, despite my fleece ear-covering hat.

And while the views from the very top of the Tower were wonderful, it was a nice, bright , sunny day, it was bitterly cold in that wind.

On the walk back to our hotel, we stopped off for hot chocolate and crêpes with hot chocolate sauce. So much sugar, so much chocolate, but so nice to sit down in the warm.

Having watched TV a few times now, I can say that I’m very disappointed by the lack of Olympjcs coverage: we have to watch Eurosport 1 in German and we see a lot of German competitors, especially the medal winners.

Car adverts are just as terrible in French or in German, and all the roads are just as unrealistically empty as they are in British ads.

Trails for reality/talent shows are just as annoying as they are at home.

And of course, you can always find a food-based programme or two, just like on Freeview.

I was hoping to listen to some French radio but the device in the hotel room either doesn’t work, or it’s too complicated for little old me. And listening online, on my phone, would be OK, if I could guarantee being able to charge it again afterwards! I know, I know, first-world problems!

Liesel, Monica and Neha sought out cheese fondue for supper this evening, I was happy to eat whatever was in the room, but no, I didn’t eat all the chocolate, not his time.

Here are Monica, Liesel, Mona, Lisa, Neha, Mick and some other character at the Louvre. 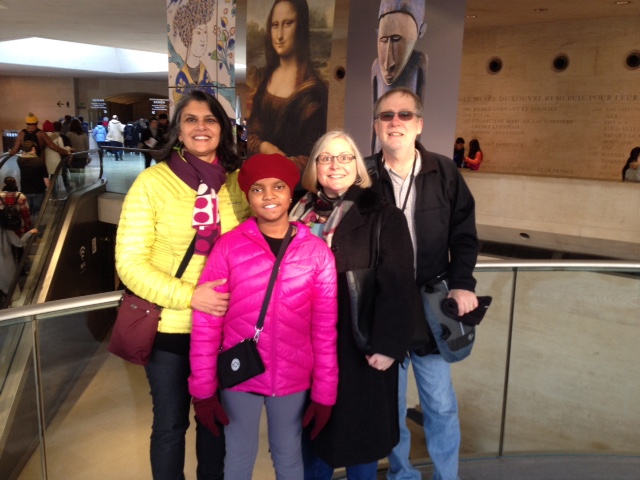