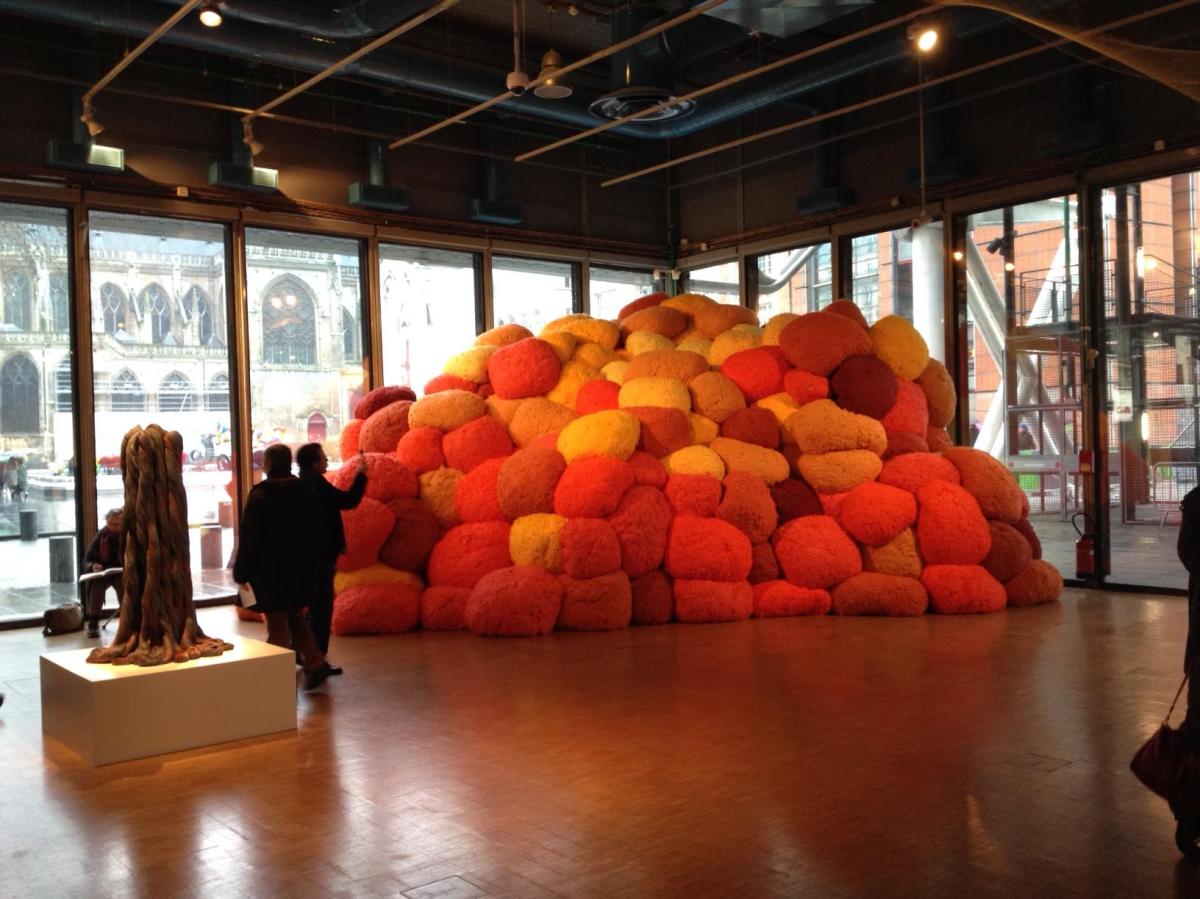 Another big breakfast gave us the energy we needed for a relatively lazy day. Apart from anything else, it felt only fair to give Andrew a day off from driving.

Our first bus was an open-top and the commentary was supplied by Count Arthur Strong, either that or CAS has a vocal doppelganger.

We spent some time in Grasmere, the village, having driven by Grasmere, the lake. I’m not saying Grasmere doesn’t welcome visitors, but I think the sign could be a little bit more prominent, maybe with a larger typeface than this embarrassment:

Grasmere Parish Church is dedicated to Oswald of Northumbria, king and champion of Christianity, who is believed to have preached on this site sometime before 642AD when he died in battle.

It is a Grade One Listed building of national historic interest. The oldest parts date from around 1300AD, but it is probably the third church to have stood on this ancient site by the side of the River Rothay.

It’s not really keeling over, but you knew that, didn’t you? Almost in the shadow ow the church is the so-called Grasmere Gingerbread® Shop. It’s a very small shop, so Pauline went in on her own to buy some gingerbread®. We have Sarah Nelson to thank for creating this cross between a biscuit and a cake and I wonder what the secret ingredients are?

We visited William Wordsworth’s grave as did some of his descendents, or so they claimed. I took a photo for them but didn’t think to take a picture of them with my own phone.

(I recently played Taylor Swift’s song The Lakes on my radio show, which includes a nod to Wordsworth. See what you’ve been missing?) The Daffodil Garden is full of daffodils, but not at this time of year. It was interesting to walk along the path that acknowledges the hundreds of people who contributed to the garden.

After a pleasant wander, we took the bus back to Ambleside. You can’t help but admire the lady who put this display together in the bookshop window.

A third bus took us to Coniston. The driver was very patient on the narrow roads, and very skilful. I think we were all glad to let someone else do the driving for us. Some of the car drivers going in the opposite direction looked terrified, I suspect a couple of steering wheels will have been crushed, they were being gripped so tightly.

As Pauline pointed out, here’s something you don’t see very often these days:

I trust they’ve been failing to sell for a number of decades because we just don’t want to be catching butterflies any more.

Coniston Water is famous for two things. It’s where Donald Campbell died in 1967 during his attempt to break the water speed record in his boat Blue Bird. And one of its islands was the inspiration for Swallows and Amazons,
the first in a delightful series of books by Arthur Ransome that I enjoyed over fifty years ago. Time for a re-read?

Andrew, Pauline and I took advantage of our perfect timing and climbed aboard for a guided boat tour of the lake. The commentary wasn’t provided by Count Arthur Strong on this occasion. In fact, she didn’t even look like him.

After a quick cup of coffee, we walked back to town, consuming blackberries on the way, and took the bus back to Ambleside. As Crowded House might sing: Four buses in one day. We greeted a few locals, although some were a bit wary of strangers.

The return bus ride was less exciting, in the sense that there was far less traffic fighting the bus for space.

Our evening meal was taken sitting inside a tuk tuk in a Thai restaurant. The waiter was very apologetic about this being the only table available, but we didn’t mind at all, even if the whole edifice moved every time one of us did.

Andrew returned to driving duties and took us to the other side of the Lake District to what was our final b&b. To quell any doubts you may have, we went in the rental car, not in the tuk tuk.

Buttermere is a good place for a walk. It’s a small lake, but we didn’t walk all the way around. We did climb the hill, though Pauline and Andrew went a bit further than I did.

It was fascinating to see water flowing out of the lake into a stream. We know it happens, but we’re more used to seeing streams flow into the main body of water.

Just as we thought we were making good progress, the road was blocked.

We weren’t held up for long, the sheepdogs were doing a great job of controlling and herding their charges.

The hotel in Nether Wasdale was very easy to find, after a long and beautiful drive through the mountains. I realised that after all the time spent in Ambleside, we never did get to stop at Dove Cottage, where William Wordsworth lived for a while with his sister Dorothy. But as with all tourist attractions, it’ll still be there next time.

The three of us went for a short walk in the direction of Wastwater and returned for a drink. St Michael and All Saints is a very small church, very quick and easy to explore.

Pauline stayed in the area over fifty years ago, so our mission was (partly) to track down the cottage in which she stayed. Our drive towards Wasdale Head was curtailed because there was too much traffic coming towards us and there was nowhere to park.

We ate a late lunch (picnic food again) and quaffed our drinks on a bench over the road from the hotel, enjoyed the sunshine and the quiet. Car headlights flashed us, announcing the arrival of Liesel and Leslie. Liesel had successfully completed a couple of work projects at home. On the way to Nether Wasdale today, they’d stopped at a Bobbin Mill for a break. And it was more interesting, I think, than they’d anticipated.

The big evening meal was closely followed by a big breakfast in the morning. We were well stocked up with energy for a long hike, even if we had a lot of extra weight to lug around. On this occasion, Liesel drove us to Wasdale Head, and it was a much more pleasant ride than yesterday, much less traffic.

It was hilly, gorgeous view of the mountains and, occasionally, the lake. Becks, streams, waterfalls and sheep all competed for our attention.

In fact, at one waterfall, we met a couple who were enjoying the outdoor shower, emerging as if in an old advert for shampoo. That’s what they do. The previous day, they’d showered under four waterfalls.

The blackberries were bountiful. Some were bitter, sour, most were ok but some, on the sunny side of the bush, were sweet and juicy, the taste of childhood Autumns.

The going was tough in places, but we all kept going, with encouragement from the others. We were greeted by sheep now and then. They drew our attention to the dry stone walls which are different in style to those in Derbyshire and Yorkshire.

We tried not to worry the sheep, at least we didn’t have a dog with us. But when I mentioned in passing to one ram that Liz Truss might become our new prime minister, he looked horrified.

This one was built in about 1550 but there has been a church on the site for about 950 years. There was no need for a guided tour on this occasion.

On the way back to Nether Wasdale, we stopped on a beach by Wastwater for our lunch. We sat on rocks for a bit, but my sister and her partner went over to sit on the grass. Again, we consumed a few handfuls of blackberries. What a wonderful lifestyle. Perfect temperature, gorgeous scenery, no deadlines to meet, no work to complete.

The postprandial perambulation up the hill proved too much for me and Leslie so we waited while the others conquered the mountain. Or so they claimed…

We fell asleep to the sound of people enjoying themselves over the road, as they celebrated Holly’s Dad’s 70th birthday. Did we gatecrash? No: far too knackered! Besides, we don’t know Holly nor her Dad.