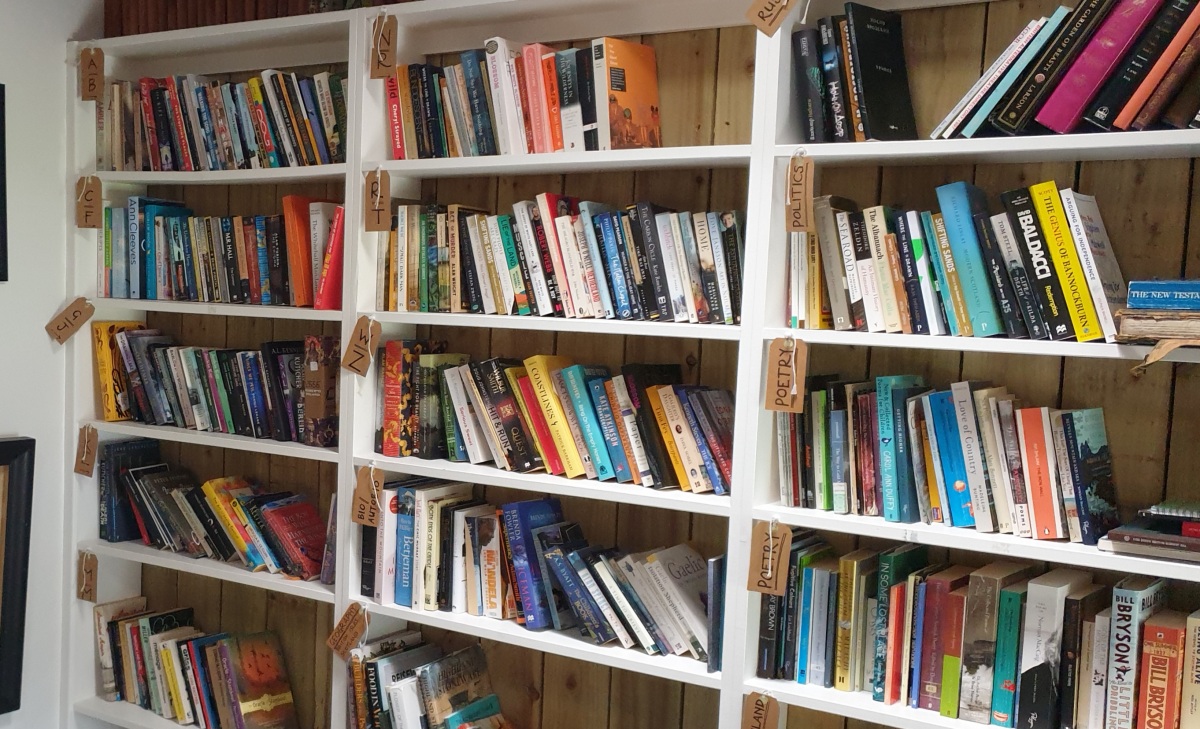 We’re staying in what can only be described as a quirky little hotel. Unusually, there is no TV set in our room. Not that we watch TV when away from home (except for the Tour de France), but how pleasant. Instead, there is a radio.

Our bathroom is not en suite. We have to leave the room, walk down the corridor to use the facility, which is ours alone, but we need a key to get in. Neither of the doors can be closed quietly however hard you try.

We can open the windows in our room but it was touch or go whether they would move. In fact, one of the latches was already broken: we weren’t the first guests to struggle. The curtains are nice and thick though, so the midnight light didn’t disturb us. No, I think what kept us up so late was the caffeine in the coffee, plus nearby doors being closed as quietly as possible. In other words, loud bangs.

But it is an old building, obviously. The lounge area looks out over the town and towards some mountains. We can look at paintings, some good, some just put up so as not to offend the artist, maybe. In the kitchen area, there are facilities to make tea and coffee (free) plus a variety of alcoholic beverages (paid for). And books. There are books everywhere: in the lounge, in every room. The book shop downstairs has a wide selection of books about Scotland, Scottish history, Scottish fiction and children’s books and, so far, as I write this, I’ve only visited twice.

Breakfast was good. Instead of black pudding, we veggies are given fruit pudding. This reminded me of mince pies whereas Liesel thought it was more like thinly sliced malt loaf.

We watched the family of seagulls. The chicks were begging for food, but the parents didn’t feed them while we were watching.

There’s a certificate on display in the lounge saying this place was voted by its employees as one of the top ten tourism employers in the Highlands and Islands. That’s great! In very small print, it’s dated 2008. I’m sure it’s still a wonderful place to work.

No venturing far afield today, we just spent time mollachin aboot this fine toon o’ Ullapool. It was a little cooler than yesterday, but still very pleasant. We passed by people, yes, people, in the streets, but we didn’t freak out. If we can’t handle this many people in a small town like this, how will we cope back in Manchester? Or London?

Thankfully, we didn’t need to go into this particular shop. All the other shops seem to have their entrances more conveniently located at ground level.

Here’s a new pier and when it was constructed, they left rock pools at three different levels to encourage interest in the local sealife.

After our morning constitutional, we had coffee at the hotel, sitting outside, at table 48, since you ask.

After a rest (a rest!) in our room, we went out for the ice cream we’d promised ourselves. I went for the licorice flavour, Liesel the banoffee. Imagine the look on Liesel’s face when she realised, half way through the first lick, that she’d picked up the wrong cone.

There was a time when I would have gone along in the dead of night with a bottle of Tippex and removed that superfluous apostrophe. Well, not really, I’m not a vandal. I would have sent my wife.

My task today was to do the laundry. But, because of Covid rules, we’re not allowed to operate the machines ourselves. Instead, we pay the lady in the shop to wash and dry for us. She provides a very good service and we should now have enough clean clothes for the rest of our trip. Unless, as I told Liesel, we have a number of messy accidents.

For the second night in a row, we dined out. Well, this time, we dined in, in our hotel. While eating, the England football team were beating Germany in the Euros. Or, if those fellow diners were Scots, maybe they were cheering for the Germans. We later found out that England had indeed won.

Sadly, littering is a problem everywhere, but Ullapool is a really clean and tidy little town compared with some I could mention.

In the ice cream shop, I also bought a bottle, a glass bottle, of Irn Bru. Another disappointment. I knew about the sugar, but it also contains Aspartame and Acesulfame K, two artificial sweeteners. Bleurgh. It had approximately the flavour that I remember, but this is not the secret recipe they’ve been using since 1901, like it says on the label.

No, I won’t be making that mistake again. So that;s Mars bars, Edinburgh Rock and Irn Brum childhood delicacies that I can no longer tolerate. What a shame. Maybe I’m getting old.

Thanks to all the correspondents who have been asking to see a pair of dancers made from chicken wire. Here they are, tripping the light fantastic in our hotel.

To round this relatively quiet day off, we’re watching today’s exciting stage of the Tour de France. And finally, a quick check on the seagull chicks: all present and correct.