We saw this advert on the back of the bus and our thoughts turned to those poor people, Liesel’s Mom and Dad, who are currently suffering sunshine in Hawaii.

Not to be outdone, we caught a bus to Mellieha Bay, north of St Julian’s. It’s not really the tourist season yet, so there weren’t many other visitors. Plus, some of the restaurants don’t open for business until the end of February. Not that we would necessarily have visited any, most dishes are fish-based.

Yes, as the trees demonstrate, it was a little bit windy today. This was one reason my walk along the beach was solitary: Liesel didn’t fancy having her legs sand-blasted so she stayed at the BBC, the Blu Beach Club.

There were few people on the beach, so not surprising to see that the sunbeds, umbrellas and sand-wheelchairs weren’t available for hire.

When I walked back to join Liesel, I realised I should have walked up the hill first, to visit these two churches.

Our Lady of the Grotto and the Parish Church of Mellieha would have been an 18-minute walk up, but it’s probably just as well I didn’t go. I was wearing shorts and many churches here don’t approve of such attire.

We caught the bus back to Sliema and I was watching our progress on Google Maps. Some funny juxtapositions came to light.

After dining out, we waited for our final bus of the day. Due to incredibly bad timing, it was ‘rush hour’ and the ‘queues’ were long and wide and disorganised.

The bus driver in Sliema was an angry man. He demanded to know why we hadn’t caught the bus in front of his. Well, it was full, plus, we weren’t 100% sure it was going where we wanted to go. Oh, it is, he assured us. Even though he didn’t have a clue where we were headed. His driving was atrocious too, our first roller-coaster experience in Malta. Gentle acceleration and braking were not in his skill set. I suggested to Liesel it might be his first day. She said it might be his last day!

If we hadn’t already consumed a beer (me) and a mojito (Liesel), we might well have indulged once we reached the safety of Paceville and home.

Did I mention a mojito? I’m not saying it contributed in any way, but Liesel fell up the stairs on the way home, earning some bruises for her efforts, to fingers and ego.

It’s halfway through our stay in Malta and it was time to do some laundry. We couldn’t believe the wash cycle was 4 hours long. It wasn’t. I think we misread 40 minutes. We left the balcony door open through the night to help the drying process. Big mistake. We were invaded by mosquitoes. I woke up with a few bites and Liesel has just one.

We followed up on a flyer we saw a couple of days ago, and returned to Valletta for a guitar recital. We joined between 30 and 40 others in the peaceful St Catherine of Italy Church for a number of pieces played on a Spanish guitar.

The music was very relaxing, the church was cool, in more senses than one, and I realised how much I enjoyed guitar music other than the almost ubiquitous electric guitar. The only downside was, the church pews were wooden benches, not a great difference from the hard seats on the bus! He re-tuned a couple of times but never used a capo. Recuerdos de la Alhambra by Francisco Tarrega was stunning: it really did sound like there were two guitars being played.

I had a quick look around the small church before we left, and I did like this painting, purporting to be something religious, but in fact just depicting a small child being dragged to church on a Sunday morning.

Today is Shrove Tuesday, the last day of the carnival and the streets were still packed with people, many of whom were in costume.

We spent a lot more time in the Museum of Archeology, with artefacts dating back to 5000 BC. It was all interesting, of course, but I would love to travel back in time to see just how accurate some of the archeologists’ interpretations are.

Looking at an exhibition of work by the artist Celia Borg Cardona was time well spent. She likes to paint scenes or people from above, from high up.

This picture brought back memories from our visit there, oh, a mere 24 hours ago!

Conservation work is going on in this museum too, and it was was interesting to watch a couple of the restorators at work for a short while.

St John’s has been given equal billing to St Paul’s in Mdina, the seat of the Archbishop of Malta, hence we visited our first Co-Cathedral today here in Valletta. It is incredibly ornate and I was allowed in because today I had covered my legs.

One of the main attractions of this venue was the opportunity to view Caravaggio’s largest painting.

We couldn’t get too close to the painting but it is more impressive in real life than this photo can possibly show. The painter chose a dramatic moment in the narrative of the Biblical event – the moment after the death-blow had been struck with the sword, but before the executioner severed the last tendons with the knife retrienved from behind his back.

Whenever I visit a church, whether Catholic or Anglican, I like to light a candle for my Mum and Dad and Sarah. There are no real candles here, though. Instead you insert your coin into a box, and one of several LED candles bursts into light. Not as satisfying, I feel, but I can understand the reluctance to light real candles, having spent years washing centuries of candle soot from the paintings and other surfaces here.

We returned to Upper Barrakka for a coffee, looked down on a huge cruise-shop and walked back to the bus station through throngs of costumed funsters.

As we were about to turn a corner, we were nearly bowled over by a fast-moving mobility scooter. The sign on the back said ‘I’m electric and eco-friendly but I can still drive like a twat’. I may have made the last bit up.

The plumber had been to our Airbnb to plug a water leak that we’d been unaware of. In the proess, he’d rendered one of the toilets unflushable. Good job I noticed before I really needed to flush!

It was a long ride to Mdina but well worth it, even on the barely padded seats on the bus.

What a great, old, walled city. The streets are narrow, even narrower than what has become normal for us. The only downside today was the wind, blowing strongly and coldly along the narrow streets. Every door was stunning, the knockers all different, and a couple of the restaurants won’t open until the end of the month!

We visited the Mdina Glass shop, studied some of the items, wanted to buy some but in the end, we don’t have the space, we don’t need more stuff and one of the lampshades we liked might not fit where we want it to go, anyway.

We wandered the streets, enjoying the warmth of the Sun when available, and remarking how quiet it was, without much traffic. Our voices and people’s footfalls echoed and now and then, we heard the bells of the horses and their carriages.

We found the wall, well, we could hardly miss it, but we weren’t prepared for the view from the top: we could see most of the way across the island. You could see your enemies approaching from miles away. The signs warned us not to climb on top of the wall as it was a sheer drop.

After a coffee and lunch (Liesel) or cake (me), we split up. My lallies were out and I wouldn’t have been welcome in St Paul’s Cathedral so Liesel explored inside while I wandered around the city.

I found the Ditch Gardens, Il Foss Tal-Imdina, and can confirm there are 273 citrus and seven olive trees. Some have been cut back quite radically: I’m sure the gardeners know what they’re doing but it might be a while before they’re producing fruit again.

I found a pastizzi stand and he only had cheese ones on offer so I had a cheese one, while watching some little people in the playground. The sculpture was a bit out of place, I felt, but the artist was unacknowledged. 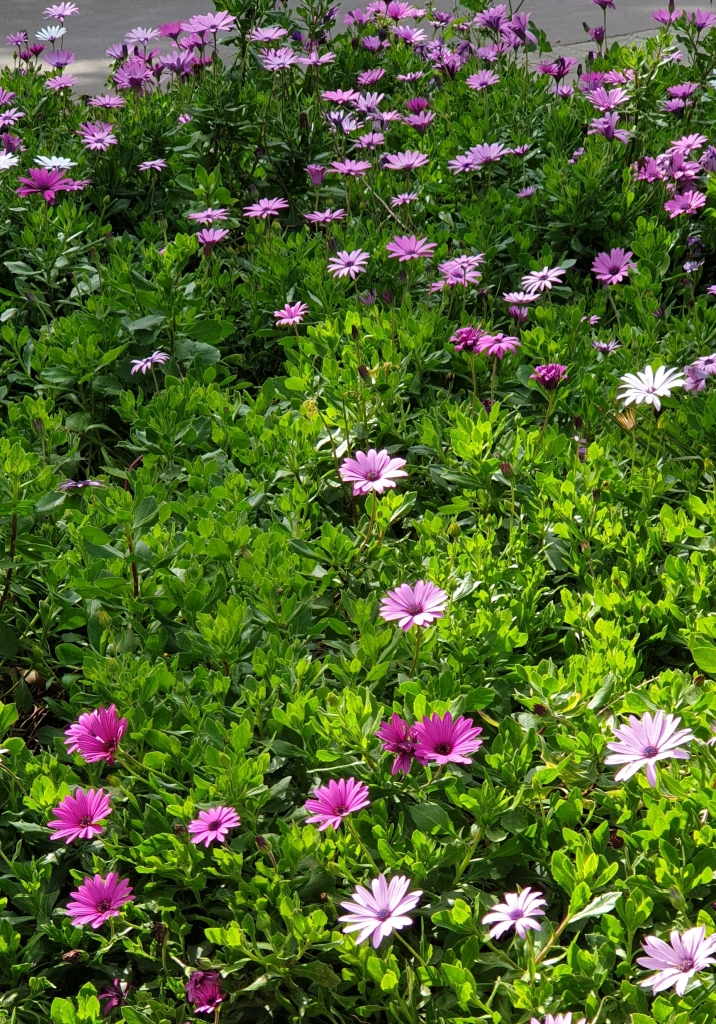 We’ve seen just a handful of nuns in Malta, but we did come across St Dorothy’s Convent.

Meanwhile, Liesel was taking pictures inside the fascinating and interesting Cathedral.

We sightseed (sightsaw?) from the bus back to Valletta and I think the biggest surprise was passing the American Embassy, apparently out in the middle of nowhere.

Local drivers do like tail-gating and using their horns, so I’m not convinced of the efficacy of this sign: ‘Chance takers are accident makers’.

The Sun set, it became dark very quickly and it was nice to see Venus before she bade farewell.