The Ring of Kerry is a circular route to the west of Killarney. The book says we should spend four days or more exploring the area, and the author, our friend Fionn, is right. We should have spent a lot more time here. At Ross Behy, there’s a small beach by the jetty, and some very brave little girls were swimming in the sea. 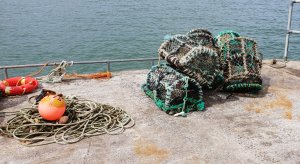 We drove through Kells but somehow missed the Priory: proof that we should have taken our time. But some of the roads, off the main road, were very narrow. Narrow and steep. Narrow, steep and right on the edge of a precipitous drop. I was driving and when Liesel advised me to change gear, I told her there was no way I was going to let go of the steering wheel just to change gear. That was a scary experience, palm-sweatingly so.

We took a ferry over to Valentia Island and visited the lighthouse at Cromwell Point. Cromwell Point as a place name intrigued me since Oliver Cromwell wasn’t much of a hero around these parts, I thought. Again, the views over the water were stunning: too many islands to visit, including one they named after me, Skellig Michael, even though I’m not much of a hero around here either.

We stopped at several viewpoints, but photos can’t do the view justice. Liesel suggested that painting a picture might be a better way of capturing the awesomeness of the landscape. Sadly, neither of us had the skills, time nor paints with us.

Too much about food here, I know but I’ll say just a couple of things. When you ask for a slice of cake in a café or restaurant, you’re offered or just given some cream to go with it, squirty cream from a can, mostly. And when you order a meal, the response is ‘perfect’. Like you’ve chosen the best possible meal on this occasion.

I remember hearing the name MacGillycuddy’s Reeks when I was very small, maybe my Mum mentioned it, or it was a lyric in a folk song. But how exciting to find that it’s a real place, a group of mountains within the Ring of Kerry.

We drove to Kate Kearney’s Cottage, parked up and then walked a further four miles through the Gap of Dunloe. We were offered a ride several times by drivers of ponies and traps, but we persevered by foot. There was one falter when it rained quite hard for a few minutes, but after that eased off, we continued our hike along the narrow road, mainly upwards.

MacGillycuddy’s Reeks are composed of 60% rocks, 25% water, 10% horse manure and the rest is sheep, people, grass and gorse. The waterfalls were too numerous to count, and if we’d tried to count the sheep, we would have been fast asleep at the top.

The wind was cold but when it stopped, the heat of the Sun on our backs was very welcome. Visitors are advised not to drive along this narrow road, but quite a few people thought they knew better.

The water in the streams was brown, possibly peat, possibly very dilute Guinness. The sound of rushing water meant that it was very hard to hear vehicles approaching from behind. The clip-clop of ponies’ hooves was much easier to hear.

Note: the photos need to be edited, yes, but that’ll need more practice on the phone. Also, I will upload many more pictures to Flickr (maybe) but I can’t now as I don’t have the password with me. All things to bear in mind when we go travelling much further afield.